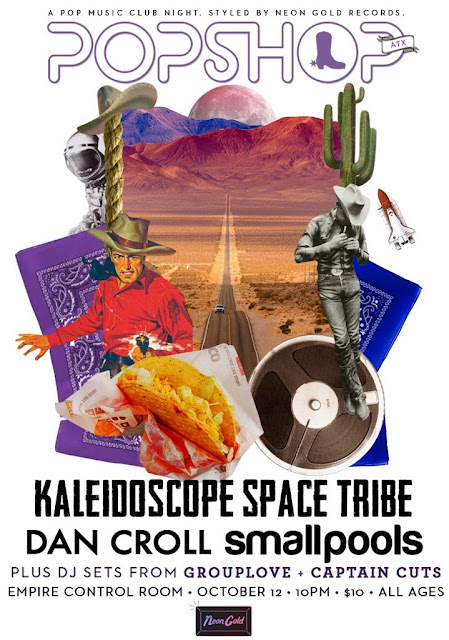 Saturday night in Austin was out of control for multiple reasons. Primarily, the massive storm that led to the last day of ACL Festival being cancelled. But also because of a cosmic night of 80’s revelry hosted by Neon Gold — the Popshop ATX. On the bill? Smallpools, Dan Croll and Kaleidoscope Space Tribe. Not familiar with that last one? Oh, it’s only Walk The Moon’s Talking Heads cover band. And it’s amazing.

Oh yeah Captain Cuts and Grouplove also threw down on the decks for some sweet DJ sets. Like I said, out of control.

Smallpools kicked off the night with their crazy catchy pop tracks including my personal favorites, “Mason Jar” and “Over and Over” before closing, of course, with their breakout single “Dreaming”.

London’s Dan Croll followed with his atmospheric synth songs “From Nowhere” and “Compliment Your Soul”. By the end, everyone was hyped and ready for the kaleidoscopic headliner.

Kaleidoscope Space Tribe (aka Walk The Moon) played all The Talking Heads hits including “Psycho Killer”, “Burning Down The House”, “Once In A Lifetime” and so much more. These guys play hard and seriously were bringing down the house. Their set went by quickly and the audience couldn’t get enough. At the end everyone was chanting “one more song”, actually the group standing next to me was shouting “five more songs”. I would’ve been okay with that.

Beaming from the response, Kaleidoscope Space Tribe returned. They hadn’t prepared enough Talking Heads songs for an encore, so they hoped everyone liked Bowie. At that, they launched into “Let’s Dance”. It was loud, it was sweaty, it was glorious. And for a moment, everyone not only danced away the blues but the rain as well.