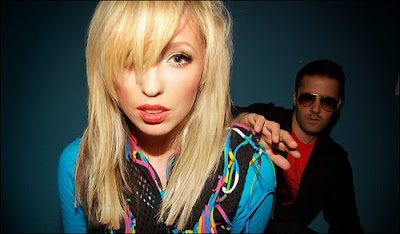 The Ting Tings are in an empire state of mind. The duo have signed with Jay-Z’s record label Roc Nation for their next album. What’s even more, Hova wants to collaborate on a song with the Brits.

The Ting Tings blew up, as everyone knows, when they released their album We Started Nothing in 2008, charting at #1 in the UK . It’s been reported that they are currently recording the second album in a converted jazz-club in Berlin. I can’t think of a better place to be, Berlin is such an inspirational city. I’m so excited for their follow-up. I anticipate more dance-ditties and sassy pop grinds for everyone’s listening pleasure. And collaborating with the J-man? I can only start to imagine what the rapper will throw down this time.

While we won’t be hearing anything new any time soon, in the meantime The Ting Tings have a new video out for their single “Great DJ.”

Spinner’s Adam Horne had this to say about the video: “On Sept. 19, the English pop duo invited 350 of their fans in Los Angeles to join them for a live performance that would go on to become the video for their single ‘Great DJ.’ However, this is far from your run-of-the-mill live performance video. All 350 partygoers were given matching black Adidas tracksuits and invited to go wild with some glow-in-the-dark paint. The psychedelic results of this indie-rock paint party are definitely worth watching.”