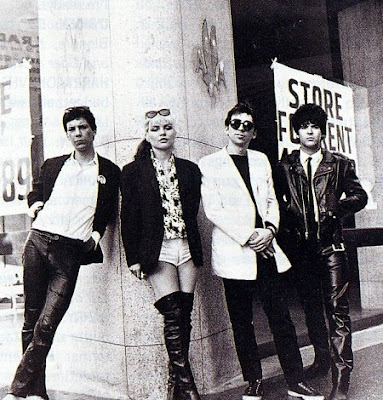 I went to the MoMA this weekend to see the Looking at Music: Side 2 exhibit on the second-to-last day it was open–typical me, leaving everything to the last minute! The show takes a look back at the 70’s and the political and cultural movements that developed during this time as a result of the poor economy (something hitting closer to home these days).  It featured works and videos from Patti Smith, Blondie, The Ramones, Sonic Youth, Basquiat and even fashion-rebel Betsey Johnson.

Here’s the MoMA’s description of the exhibit:

“In the mid-1970s, right on the heels of Conceptual art and Minimalism, many visual artists turned to making raw, hard-edged work that addressed urban blight and bad economies. With an ear set to punk, these artists worked in the netherworld between music and media, often forming their own short-lived bands. Their rough, do-it-yourself projects pushed the envelope of interdisciplinary experimentation, which soon spread to underground venues from New York to London, Düsseldorf, and Krakow. This exhibition features music videos, super-8 films, drawings, photographs, and zines from MoMA’s collection that explore the melding of music, media, and visual art in the final decades leading up to the twenty-first century.”

It got me thinking about the present day and how plugged in our society is.  We have dozens of accounts on dozens of social networking sights and dozens of ways to communicate with someone without actually speaking to them or seeing them in person.  E-mail, wall post, text message, tweet and on and on and on.  I think in the not-so-distant future a counter-culture will emerge, like in the 70’s, from the entanglement of social media.  People will distance themselves from these forms of communication and focus on the traditional forms of communication: calling someone on the phone, seeing them face to face, writing letters, etc.  Instead of ‘connecting’ with people behind a box into the cyber portal that is the internet, credibility will become based on the relationships people build, and the attention people garner for products and businesses without utilizing any of these online tools.  P2P (person to person) networking, word of mouth marketing and guerrilla campaigns will become more popular, and people will return to traditional formats for expressing themselves.  Zines will start popping up again, music will continue to change and evolve, and new rock idols will be born.  Ladies and gentlemen this is my proclamation. This is where I see the future headed.  This is my manifesto.