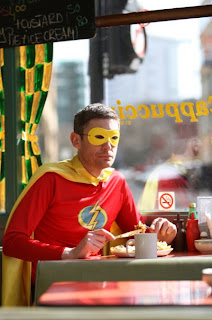 A friend introduced me to this great song the other day, “Sweetshop” by Flash Atkins.  I love the beat and I’m shocked this guys song and video don’t have more hits!  This must be remedied.

“Sweetshop” is a sugar rush.  A delicious elctro dance beat, with a pretty high tech music video to boot.  Flash is a super hero who dresses in a red and blue body suit with a lightning bolt insignia across his chest.

He describes himself as such on his web site:

Flash Atkins is a super hero who had his gravy days in the 80s saving the world with his ability to manipulate sound. Unfortunately he’s fallen on hard times and can be spotted in the less salubrious parts of London, often stoned or drunk on borrowed money. To make ends meet he uses his special powers to remix and make deep tech-soul tracks for We Are Woodville and paperecordings

Now I can’t say I know what Flash was up to in the 80’s, but if his superpower is remixing sick music, then he definitely fulfills his superhero role. So here’s hoping Flash Atkins has enough superpowers stored up to deliver even more 80’s soaked electro beats!