Parking garages, just a place to park? Hardly. In Austin, the roof of a parking lot is prime concert space. In downtown last night, one lot was the sight of a Spotify showcase featuring performances by Grimes, SBTRKT and A$AP Rocky.

Grimes started off the night on a high note, playing her addicting electronic acts including “Vanessa” and “Oblivion.” With her hair pulled back in a tight ponytail, revealing the glitter and crystals on her forehead, she ignited the crowd with her bright and endearing personality.

Following Grimes was SBTRKT (Aaron Jerome) who brought the house down with his amazing mix of electronic and dubstep. A dance party had erupted as he played hits like “Wildfire” and “Hold On.” From time to time he’d peak up from under his mask, looking at the audience, and sheepishly revealing a smile, pleased to see everyone singing and dancing along to the music. It was an electric hour, where the energy never wained for a minute. 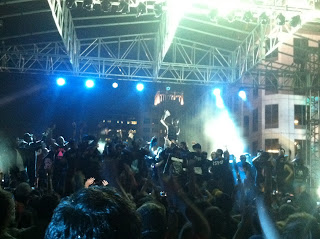 Closing the set was Brooklyn hip-hopper A$AP Rocky who had his whole entourage on stage with him (which seemed like nearly 100 people). Hands were waving, water bottles were being tossed and “purple” haze was filling the air. A$AP Rocky had certainly entered the building (or should I say parking lot). It was memorable to say the least. The rapper surprised the audience by playing a brand new track that night too. He didn’t mention the name of it – but it had some killer beats.