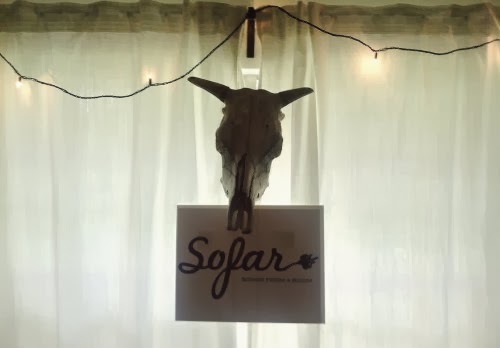 Sofar Sounds got in on the ACL Festival action last month with a special ACL dedicated Sofar. It’s always awesome to see bands in such an intimate environment, but it was especially sweet to see these artists outside of the swarms of people over at Zilker. Major kudos to X Ambassadors, Black Books, Colony House, and Grace London for taking time out to play. It was definitely a highlight of weekend two (especially since I attended weekend one and was experiencing major festival withdrawal).

Brooklyn’s X Ambassadors started things off performing songs from their new EP, Love Songs Drug Songs. Frontman Sam Harris has a piercingly soulful voice that truly resonated in the cozy setting. There’s a vigor and intensity behind X Ambassadors music whether singing about heartbreak on “Litost” or breaking ties on “Love Songs Drug Songs”. When Sam sings, “this is the last time I’m going to put you back together” on the latter, it brilliantly captures that utter frustration when you’ve had enough of someone’s crap, you’re done.

Then there’s their current single “Uncontrollable”. If you haven’t heard it yet, I bet you’ll have a hard time resisting hitting repeat. It’s an emotive, tense song about trying to be there for somebody who’s hit a low point. Not to mention that moment when Sam busted out a sweet saxophone solo that sealed the deal. These guys are smooth operators. But don’t just take my word for it, see for yourself. X Amabssadors join Panic! At The Disco on their Too Weird To Live, Too Rare To Die! Tour this January. See the full schedule here.

Austin locals Black Books changed the dial with dreamy electronic ditty’s. There’s a softness and openness to their music; the songs aren’t rushed and the vocals aren’t washed out by heavy synths. The result is something quite lovely. For the Sofar gig, Black Books played “In My Arms”, “Something To Remember” and “The Big Idea” (among others), which especially cast a starry spell. Stripped down they sounded spellbinding so I can imagine how enchanting they sound fully plugged in. I’ll be keeping my eye out for future shows.

Black Books just released their self-titled debut album last month. Do yourself a favor and get acquainted with this five-piece.

Colony House (formerly CALEB) hail from Franklin, TN and is comprised of brothers Caleb and Will Chapman and friend Scott Mills. The name derives from an actual apartment complex in Franklin that the three guys have all called home at one point or another. Their hometown and their bond is at the heart of Colony House’s music. Frontman Caleb writes songs reflective of his personal experiences. One song he wrote for his brother, never intending for it to leave the four walls of his bedroom. Once he played the song for Will, his brother said they had to have it on the record. He told Sofar before playing, “this is my family story in three and a half minutes”.

During the set Colony House played another song that Caleb wrote for somebody special, his first love song for his girlfriend at the time. The girlfriend is now his wife. As Caleb said, “it worked out for me.” It’s evident this band wears their hearts on their sleeves, plus they’ve got that irresistible Southern charm going for them. So if romance is what you’re after, cozy up to Colony House.

Grace London is one of those people that I find totally impressive yet simultaneously makes me feel bad about myself. Why? Because she’s 13 and crazy talented. My 13 year old self was all angst and little else. Anyway, back to Grace. She’s a 13 year old songwriter, guitar player and foot stomper with witty lyrics reminiscent of Kate Nash. The Cali girl sings with drama, incorporating repetition, breathing and warbling into her delivery, sort of like a young Merrill Garbus.

London released her debut EP, Rocketship Girl, last year and definitely is one to watch. If she’s already playing ACL at age 13 who knows where she’ll be come her sweet 16 and beyond. I’m interested to find out.