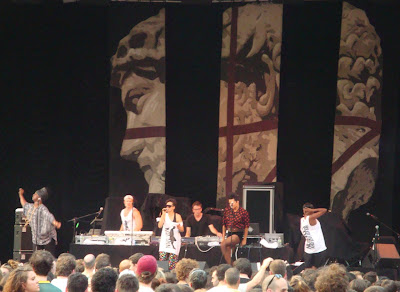 Hercules and Love Affair put on a show.  Draped in African patterned fabrics contrasting with club kid threads they unleashed their infectious songs as dancers vogued to the music. Kim Ann Foxman was looking fierce as always, while new band members Shaun Wright and Aerea Negrot seemed to fit their new roles quite confidently.  Everyone was moving in one form or another.  Once again the band achieved their one goal: to make people dance.  But my question is, how could you not dance? With songs like “Blind,” “You Belong,” and “Classique #2” being stationary is not an option.

While the lovely Nomi Ruiz is no longer a part of the lineup she was at the show.  Afterwards I met her and she told me about her solo project Jessica 6.  Continuing with producing contagious dance tracks, she’s singing her way to “the top of the world” with her unparalleled voice on songs like “Fun Girl.”  Catch her live at Nublu on August 23rd! 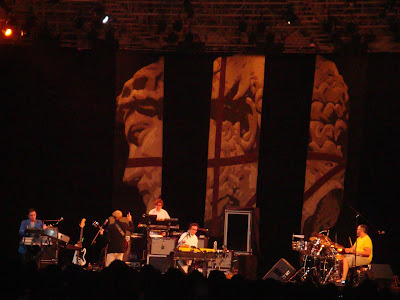 As the sun went down, Hot Chip roused the throng of fans.  People were literally dancing in the streets as they moved from one side of the field to the other for food and beer refills, or just a better viewing of the stage.  While Alexis Taylor apologized for his voice a few songs in, explaining he had a cold, nobody seemed to really notice or mind.  The dancing, the screaming and the signing reverberated throughout the entirety of the performance.

A giant Roman bust, the album art for One Life Stand, posed as the stage backdrop as the band sang a variety of songs from their discography.  Opening with “And I Was A Boy From School,” and ending with “Ready For The Floor” the concert was electric from start to finish.