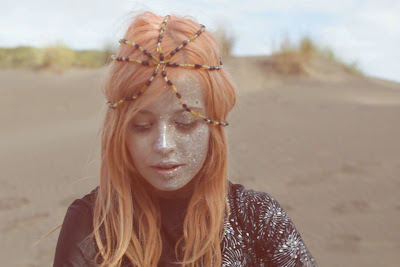 New Zealand electro-pop singer Ruby Frost has released a new video for her latest single “Porcupine,” off her upcoming debut album, Odyssey, scheduled for release in early 2012. The songstress recently finished recording the project in New York with none-other than producer-extraordinaire Chris Zane (Passion Pit, The Walkmen, Holy Ghost, Friendly Fires). For those of you that follow my blog, you’ll know that Frost has been featured a few times here ( I listed the track “Moonlight (Leno Lovecraft Remix)” as one of my top singles of 2010), and am looking forward to hearing the full album next year.

Frost was kind enough to take a moment to talk to SoundDessert about what it was like working with Chris Zane, where she gets her fashion inspiration from, and why she loves performing in the US. Check out the video for “Porcupine” below and read on!

It was a dream come true! He’d originally only signed on to produce a couple of my singles in between projects, but then it all evolved and he was able to finish the lot. It was neat spending time in New York, watching all my songs in their various scrappy states come to life. Chris has an amazing collection of vintage synths, and all the sounds on the album are perfect! I also like that he didn’t over-think things too much. He’d just get a good vision for each song, and then go for it hell-for-leather adding layer upon layer. I learnt a lot from watching him work, it was such an inspiring time.

2. Where do you get your fashion/makeup inspiration from?

I go through obsessions that last about 3-6 months. I had this really intense Warhol phase where I would pore over books about him, and study his philosophy book, and watch movies and have his images covering my walls… to the point where I could really imagine his voice rattling around in my head. Other obsessions have been Bowie, and older images of Yoko Ono. I’m fascinated by Harajuku street fashion, and kids movies like ‘Neverending Story’. But I think it all started years ago when I first saw a DVD of the Yeah Yeah Yeahs, and Karen looked so cool dressed up.

3. Whats the most interesting clothing item that you own?

Hmm.. I have 3 racks of sequined, bedazzled costumes in my spare room so this is a hard question! At the moment it’s maybe the 70s Japanese wedding dress I altered and wore to the New Zealand Music Awards! It was the best dress to wear, felt magical.

Not yet, but I’m definitely planning on getting back there as soon as I can to promote the new album. Crowds are reaallly different to perform to in the US. Crowds in New Zealand (and even Australia) tend to hold back a lot more, so it can be hard to gauge how things are going. But people are so encouraging and open in the US. It’s a nice change.

5. If you had to describe your new album in three words, what would they be?
Otherworldly, synthsational, painfully-honest-in-an-abstract-way. Sorry for cheating!
Chris Zane