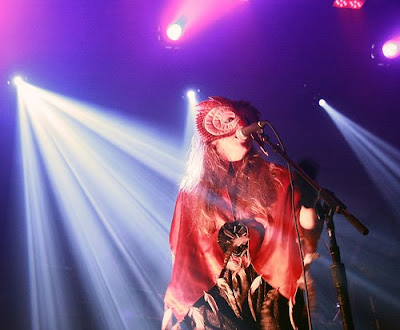 After a FOUR year hiatus, the Norwegian electronic icons Röyksopp performed for two special nights at Webster Hall (11/23 and 11/24) last week!  I caught the show on Tuesday and left for my Thanksgiving destination immediately after.  Accompanied by Anneli Drecker, Torbjørn and Svein performed an hour and a half set, with not one but two encores.  Singing in place of the likes of Karin Andersson and Robyn, Anneli brought the house down.  What an amazing voice, not to mention the costumes she wore! She first appeared on stage in a 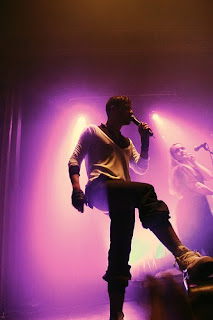 The air was thick and heavy, as bursts of chalky particles floated around the room.  The lights, blinding at times, pushed the audience to dance harder.  Beaming rays stretched over the stage lowering into a flat plane above the sea of hipster heads, awashing everyone with light.  We were being transported into another galaxy and Röyksopp were our pilots.  Each song fueled the crowd with more energy and excitement, wanting to hear more.  The boys may have been behind keyboards, but they brought so much intensity to every song, their bodies impulsively moving to each addicting beat.  Thanking the audience for an “interesting Tuesday” they seemed really pleased (and slightly surprised even?) by the enthusiastic welcome they received.

Highlights of the night included “The Girl and the Robot” when Svein dressed up in a big red robot costume, singing alongside Anneli.  “What Else Is There” when Anneli came out in the amazing owl costume, pictured above, and the encore when Royksopp played “Fat Burner” an unreleased track from their new album Senior! Look for its release in early 2010.