Father John Misty brought his Variety show to Austin’s Emo’s last week. The ‘variety’ being Brooklyn comedian Kate Berlant. It may have been the first show I’ve seen where a comedian opened, but I wasn’t against it. In fact, I’m loving the concept.

Named one of The 50 Funniest People In Brooklyn by Brooklyn Magazine, Kate Berlant delivers a strong witty dose of sarcasm and irony through a stream-of-consciousness dialogue. Shifting into different characters and voices, from the zen yoga instructor, to the “420 friendly” chick that only has guy friends, she got a lot of laughs out of me and my friend. Go check her out if given the chance!

Then there’s Father John Misty, AKA the enigma that is Joshua Tillman. I’d read some colorful reviews about his on stage banter and wasn’t sure what to expect from the earnest singer, only that I’d be entertained by his talent and sharp candor.

Waking on stage wearing a bunny head and pouring a drink of red wine, Misty opened with “Hollywood Forever Cemetery Sings,” a personal favorite and a song I thought he’d save for the finale. Then again, it set things up quite nicely for the rest of his set, or as he put it, “I’ve got a metaphorical hole to dig and you’ve got a shovel.” He dug his metaphorical hole for an hour and a half as he played songs from his debut album Fear Fun, including “I Love You, Honeybear”, “Nancy From Now On” and “Funtimes In Babylon”, along with new songs from his upcoming sophomore release. 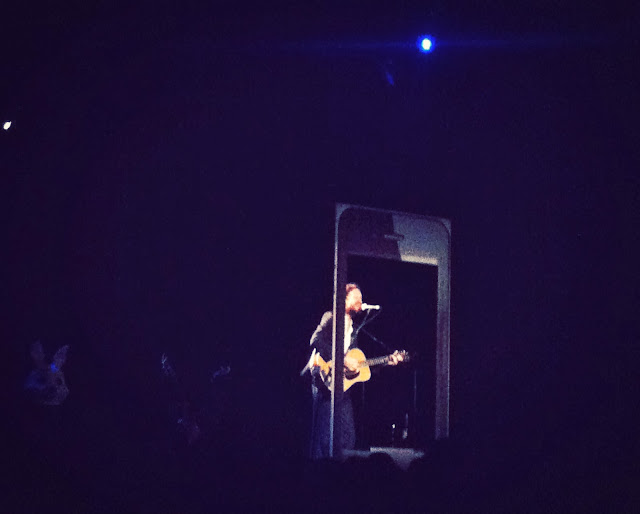 At one point the singer paused and said, “If there’s one thing about me, I’ve got my finger on the pulse…so I made a prototype to enhance your experience.” Out came a life size iPhone frame that Misty sang behind. “Pull those phones out and let’s create an irony wormhole.” The kicker? His prototype was out of date as Apple released it’s new iPhone model just as FJM began his tour. Technology, man.

Father John Misty may or may not be tapped into the tech zeitgeist but he looks out for his fans and their interests. “Don’t give up on your dreams. Dreams are really easy,” said the sage one after singing “Funtimes In Babylon.” And before his cover of Dory Previn’s “Lady With The Braid” he said, “I’m trying to get some of you laid tonight. Now’s your chance to make a move.” If Misty’s magic worked for you that night, I hope you thanked him on Twitter.

Father John Misty closed the night with a new song and “O I Long to Feel Your Arms”. As he sang his last note he quietly exited the stage. As the lights turned on the audience lingered a bit, mesmerized by the man that is Father John Misty.