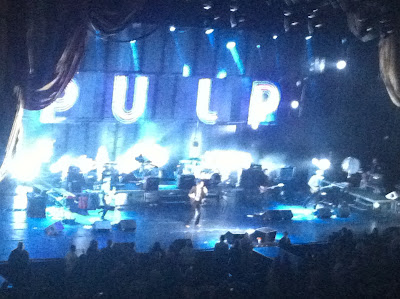 It’s been fourteen years since Pulp have played a concert on American soil. That streak was spectacularly broken this week, as the British legends played two sold out shows at Radio City Music Hall. As their name illuminated the stage, Pulp appeared, opening the night with one of my personal favorites, “Do You Remember The First Time?”

Greeting the audience, frontman Jarvis Cocker announced, “It’s our second night playing here, but technically it’s the first,” alluding to the fact that Tuesday’s show had been added after Wednesday’s quickly sold out. “You guys are the early-adopters!” Cocker declared as he thanked everyone.

Pulp played hit after hit for two magnificent hours including “Razzamatazz” “Monday Morning” and “Disco 2000” in which Cocker stated, “This song was written before the year 2000 and now it’s 12 years after.” One of the highlights of the night was definitely Cocker’s segues including when he asked “Is any lady wearing a pencil skirt?” Dubious of the number of cheers he responded, “I don’t believe you all” before launching into, you guessed it “Pencil Skirt.” When introducing “Something Changed” Cocker commented, “You never know when something’s going to change…we try to read horoscopes and all that crap.”

Saving the best for last, Cocker started talking about a girl he once met at Saint Martin’s College from Greece. He continued a bit longer and then said, “If you don’t know by now what song this is, then I don’t know why you’re here.” At that point everyone was on their feet and cheering relentlessly as they unleashed the nearly nine minute long epic of “Common People.” The audience exploded into cheers as the song ended, Cocker graciously thanked everyone and then Pulp disappeared from the stage. The show wasn’t quite over yet though.

Pulp returned for an encore. Before singing “Like A Friend” Cocker stated, “Relationships don’t always work out, that’s why we have songs…to get over it.” Dedicated to all the mistakes and misfits Pulp ended the night with the electric “Mis-Shapes”

It had barely just begun and it came to an end so quickly. Pulp was pitch perfect. It was if no time had passed at all. Hopefully they’ll be back again before another decade passes. If not, at least I know I got to witness history in the making that night.