On Friday Pavement wrapped their four night stint at SummerStage, playing to a nearly sold out audience every night with openers including The Oh Sees, The Beets, and Times New Viking.

Every night was different and it was great to be able to compare and the contrast the shows from one night to the next, and notice subtle differences in their performances. Pavement was pretty talkative the first night in, excited to kick off the week playing in central park.  Despite a few false-starts, they sounded great and played hard during the whole two hour set. It was a great show, setting the bar high for the rest of the week.

Day two was a bit crazy thanks to the huge lightning storm that passed through the city that night.  Moving everyone off the bleachers, SS paused the concert for 20 minutes while the storm passed, to the consternation of the fans.  Before the clouds moved in, the evening started off with an immaculate confectionary display of a giant horse cake presented by none other then the Ace of Cakes crew! It was a beautiful design and I was amazed it was even edible–but it was—and it was delicious! Feast your eyes on the wonderous cake: 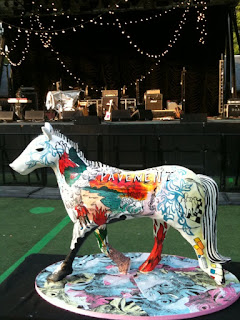 With no other giant storms, the remaining nights went much more smoothly.   By the end of the week I had become a seasoned Pavement listener, and probably could have seen them perform even one more night.