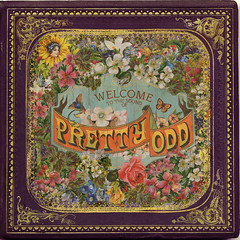 Panic at the Disco – Pretty. Odd.

I AM A PANIC AT THE DISCO FAN! (Notice the exclamation point after panic has been permanently removed) I have two friends that our closeted Panic at the Disco fans. When the three of us get together we relish in our mutual love for the bands poppy beats, blasting their songs at obscene volumes, shouting out the lyrics and dancing around wildly. Their songs give us an adrenaline rush and ever since we sampled the sweet taste of their latest single “Nine In the Afternoon” we couldn’t wait for more. Why are my friends closeted you ask? Many have criticized the bands music as too emo, the lyrics too oddball and the eyeliner too heavy. Criticism and complaints when my friends chose to play Panic among a crowd of friends caused them to repress their affection into a guilty pleasure, not wanting to be written off as having poor music taste.

My love for music defines genres. I bounce around from Edith Piaf to Beyonce, Peter Bjorn and John to The Blood Brothers. Doesn’t it all come down to your mood–whether your angry or happy or just want to shake what your mama gave you? Panic at the Disco speaks to many of my moods and relieves many a dancing urge.

And now I can happily say that the wait for their new album is finally over.

Pretty. Odd. unveiled itself to eager and curious ears alike. Their sophomoric debut is definitely a departure from their previous album A Fever You Can’t Sweat Out, however it is just as satisfying. Less boisterous and more harmonious it would be difficult, and a stretch, to continue labeling this band as emo. Though this album may not call for as much dancing, you can still bet it will be blasted at an unreasonable listening volume.

So lets discuss: thoughts on the new album? And how do we feel about the punctuation change? and most importantly…

Are you out of the closet?