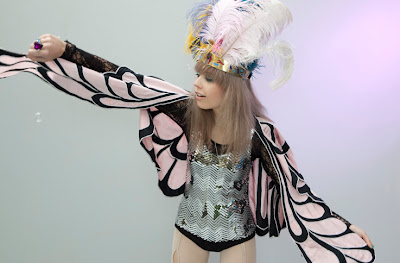 I first blogged about New Zealand singer Ruby Frost a few months ago. She’s currently working with Chris Zane (Passion Pit, The Walkmen, Aesobi Seksu, Mumford & Sons) on her debut album – planned for release sometime this year.  She’s already wrapped up a few songs including ‘Hazy’, ‘Smoke and Mirrors’ and ‘Young.’  Judging by tracks like “Moonlight” and “Goodnight” the CD will be a dance-infused delight.  In addition to laying down tracks, Frost just released a video for the single “Moonlight.”

Shot in black and white, the video is part romantic and part nebulous.  With kaleidoscopic angles the video switches from pretty close-ups of Frost, to fragmented/rotating shots of the singer. She has some great looks in the video, my favorite being the white feathered dress she’s wearing toward the end, paired with an eclectic mix of baubles.

Have a look and get a free download of “Moonlight” here!