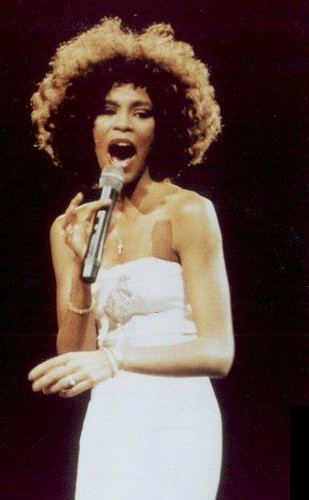 Whitney Houston performing during her Greatest Love of All Tour at the Garden State Arts Center in New Jersey on August 4 1986. Photo credit: tm_10001

Whitney Houston was laid to rest today in a private service in her hometown of New Jersey. Her untimely passing has touched everyone this week, and her courageous spirit, and unparalleled voice won’t soon be forgotten. While I loved so many of her songs, the one that had the biggest impact on me as child had to be “I Will Always Love You.” I will always be blown away by her beauty and mastery of that song.

Many musicians attempted to do justice to Whitney’s memory and legacy this week, performing “I Will Always Love You” and many of her other hits, as a tribute. Arethra Franklin (who Whitney referred to as “Aunt Ree”) performed this iconic song along with “Greatest Love of All” at Radio City Music Hall, while Ashanti sang “I Have Nothing” on Good Morning America. Monica shared her “Houston history” at the Hot 93.7 Love and Laughter concert in Hartford, CT, and Nicole Scherzinger delivered an impressive rendition of “I Will Always Love You” while on tour in Brussels.

Indie-rockers Girls also paid tribute to the legend. Frontman Christopher Owens got choked up as he too sang, “I Will Always Love You” at Singapore’s Laneway Festival. Singer Charice also covered the song during a concert where she was joined on piano with a guy who, “did a little music for The Bodyguard a few years back.” Dubbed by Oprah as the “most talented girl in the world”, her rendition of “I Will Always Love You” is pretty spectacular, and one of the best tributes I’ve heard so far. Watch below:

What was your favorite Whitney song? Seen other great Whitney tributes? Share in the comments.