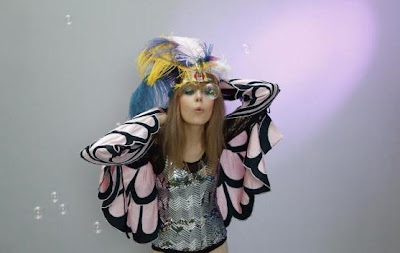 A New Zealand darling, Ruby Frost promises to make waves beyond the shores of her homeland.  With lively harmonies, a soaring voice and an infectious beaming smile, the singer creates impassioned and dazzling dittys. A small taste of her style can be sampled on her myspace. The spirited “Goodnight” undulates as Frost coo’s “oo-ah-ooh” in the chorus, while steady chimes in the background sound akin to a marching beat.  A song about moving forward Frost cries, “Now’s the time to say goodnight, gave you the benefit of the doubt but you proved me right.” In contrast the fresh “Moonlight (Leno Lovecraft Remix)” has bold synths and drum claps, and an infectious chorus that will compel you to dance.

Ruby Frost-Goodnight by Check The Availability

Last year Frost was crowned the winner of MTV New Zealand’s 42 Unheard Competition, and – as her prize – was signed to Universal Music.  She is currently working on shooting a music video – for which song I do not know, though I am curious to see the finished product.  Frost stands out not only for her music but her appearance, as she enjoys dressing in fun patterns and costumes (she wore a sequined bat-cape for the MTV competition) so the video promises to be imaginative. She has been keeping fans in suspense revealing few details about the new record, careful not to comment until everything is just right.

Helping Frost record her new record is the talented producer Chris Zane who’s worked with Passion Pit, The Walkmen, Aesobi Seksu and Mumford & Sons. The two have already recorded a number of songs including ‘Hazy,’ ‘Smoke and Mirrors’ and ‘Young.’

Frost’s debut album is expected to be released in 2011.