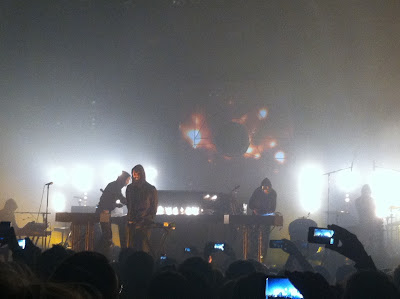 Miike Snow have touched down in Manhattan. Their landing pad? Terminal 5, where the band has played three sold out shows this week. On Tuesday, night two, as the crowd anxiously awaited the start of the show, a hexagonal beat machine, known as “the blob,” (and looks like a space shuttle) loomed center stage. Overhead a video projection hung on the wall, with a gaping black hole in the middle. If Miike Snow was trying to transport the audience to another dimension, they did just that.

As the stage flooded with red lights, Miike Snow emerged on stage in devilish masks, opening the night with songs from their latest album Happy To You including “Enter The Joker’s Liar” and “The Wave.” Covering choice tracks like “Black and Blue,” “Sylvia,” “Vase,” “Burial” and “Bavarian #1 (Say You Will)” the elctro-mavens achieved a happy balance of new and old.

As snowmageddon reigned down, the audience jumped and shouted. I kept overhearing how surprised people were by how “live” the show was. For such an electronic sound, it came as a surprise to many to see the band playing instruments (piano, steel drums, keyboard and let’s not forget “the blob”) as opposed to  being strapped to a laptop like many of their contemporaries such as SBTRKT. Lead singer Andrew Wyatt played a number of songs on the piano, as he squeezed over on stage left beside the blob. Another marvel? Wyatt’s voice. Those high notes sound even more incredible live, and the audience took notice. 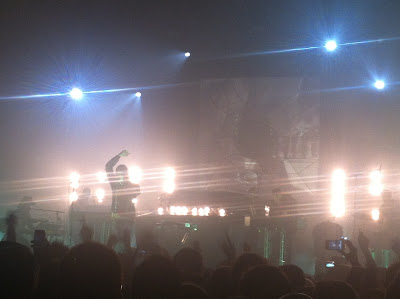 Miike Snow closed the set with the electrifying “Devil’s Work” at which point everyone lost it (side note: I almost lost it when the girl in-front of me kept whipping her pony tail back and forth in my face – girls please wear your hair down or in a BUN if you want to dance in close quarters). Walking off stage, they exited briefly before returning for an encore. Giving people a chance to catch their breaths, Miike Snow ended the night with the temperate “Sans Soleil.” As for everyone else? They were quite intoxicated, in more ways than one.