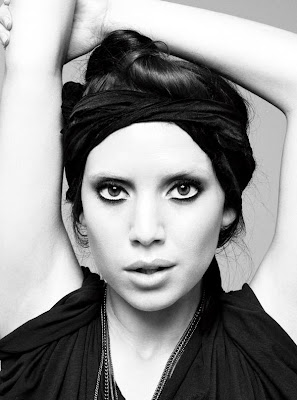 Lykke Li released her new single “Get Some” last month, and now the official music video has been released.  It’s a deviation from her previously look and vibe to say the least.  Darker and more aggressive, the first thing that stands out is how little clothes she wearing compared to all her prior videos.  She wears silver boy shorts covered in chains and hardware including little spikes bordering her groin area, which she pairs with a tribal looking top, comprised of large rings around her neck.

In place of a more reserved, modest singer from her Youth Novels ’08 debut, appears to be a more confident, self-assured and experienced artist.  Discussing male/female dynamics and power roles in a Pitchfork interview, Lykke Li alludes to some of the challenges she’s faced as a female in the music industry including remarks on her “cutesy” voice.  On her latest album Wounded Rhymes Lykke Li channels these experiences into her music.  Instead of allowing herself to fall prey to the remarks, she gets confrontational, ready to fight her way to the top.  She’s not going anywhere, and she wants you to know it.  She’s a “prostitute,” in other words she holds the cards, and she dares you to take her on.

“I wanted the video for “Get Some” to be this do-it-yourself, join-the-cult thing where a woman draws you in, and then bam!– she’s going to crush you. ” -Lykke Li

Is going pantsless the best way to communicate this message though? It’s so trendy right now (Lady Gaga, Christina Aguilera, Miley Cyrus have all rocked the look) I wonder if it loses it’s impact.  I understand the connection to the prostitute=power theme, but I wonder if there are better ways to illustrate feminine power and strength beyond sex appeal, no?  Whatever the answer is, I must say, I do like this new side of Lykke Li.  It’s always refreshing to see a woman deliberating and challenging gender roles.

So what do you think: does this video send the message she’s going for, in terms of sexual power and female domination? What do you think of the video and the new look?