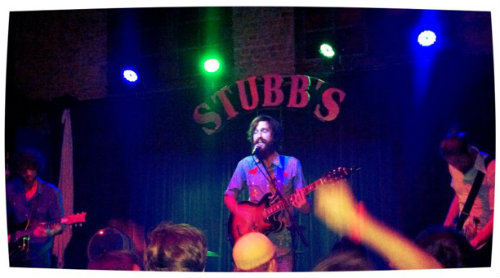 Little Radar played to a packed room for their Souvenirs release show at Stubb’s over the weekend. They of course played a handful of new material off the LP including their dreamy single “Siren“, “Wasted Youth” and “Coming Clean”.

During opening acts The Calm Blue Sea and The Baker Family, the audience was a bit timid, leaving a huge gap at the front of the stage, hesitant to get too close. That hesitation completely dissipated the moment Little Radar took to the stage. Not only were people right up front, but there were some really zealous fist-pumping broskis in the crowd. So zealous in fact, that lead vocalist Sean Hale jokingly called for security and then countered, “this guy knows all the words, we need him!”

Needless to say, people were having a good time and Little Radar definitely fed off the energy.

Also congrats to Twitter user @ejk211. She won the Sound Dessert ticket giveaway and was hopefully one of the people in front having the best time.