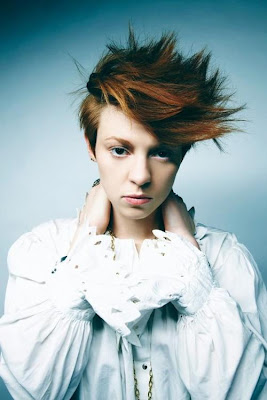 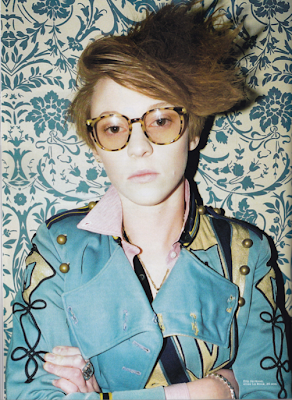 How much do I love La Roux? I can’t get enough of her these days and I’m impatiently waiting for her album to drop June 29. As of now I have to make due with her magnetic singles (and sickk remixes)! La Roux aka Elly Jackson and her co writer/producer Ben Langmaid, hail from Britain, and actually came up with the name La Roux after flipping through a book of baby names. La Roux, meaning “red-haired one” is certainly appropriate. Jackson’s choppy cropped hair contrasting with her long gravity-defying bangs, definitely make this red-head stand out from a crowd. Not to mention her distinct fashion style. Mixing fabrics, patterns and colors, donning geometric cut blazers, and layering up accessories, the girl can dress. She actually even designs a lot of her clothes, so you know she has a flair for fashion.

Her high energy tempo’s, and electrifying voice have garnered La Roux lots of recognition. She has great vocal range, hitting hight notes that would make Jake Shears proud. Featured on two Kitsune Maison Compilations, listed by the Guardian as one of the “Best New Acts of 2009,” and recently opening up for Lily Allen on her UK tour, La Roux is definitely getting the attention she deserves. Many of the songs on her self titled album, are inspired by a rocky relationship the singer experienced.

Amazing Remix of Bulletproof by Zinc!!