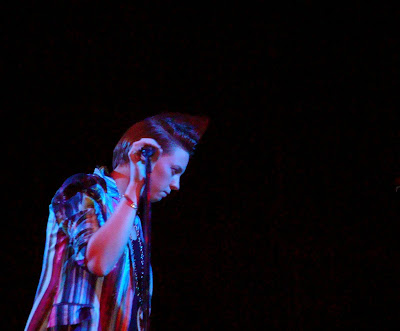 La Roux lit up New York Monday night, playing a sold out show at the Highline Ballroom. Anticipating her popularity, I immediately bought tickets as soon as they went on sale, but others were not so lucky. A line of fans stood outside the venue for hours, hoping to gain admittance to the show. Inside, the venue was packed. An assortment of gays, suits and fashonistas made up La Roux’s eclectic fan base. Body Language, a quirky Brooklyn-based electronic group, opened, singing about unusual food items such as butter and sandwiches. The group was led by Angelica Bess, who has a cool voice and cute style.

La Roux took to the stage around 10:00 modeling her triangular hair, and a colorful striped suit. She apologized repeatedly throughout the night, explaining to the audience she was sick and as a result, would be performing a shortened set. New York was lucky to have her, since La Roux canceled shows in LA and Chicago earlier in the week due to her cold. The audience responded with support and enthusiasm, dancing and cheering enthusiastically to her electro-pop ditties–even chiming in at the chorus for Bulletproof when La Roux was in need of assistance. She promised fans she would return better and stronger in February with another American tour, and hoped we wouldn’t leave “too pissed off” after the show.

While it was visible La Roux was under the weather, she gave her all, not wanting to disappoint her fans-or herself with the performance. She danced around the stage, played drums with band-mate William at one point, and kept the energy high.

The crowd left sweaty and satisfied. William, the drummer, even commented on the energy after 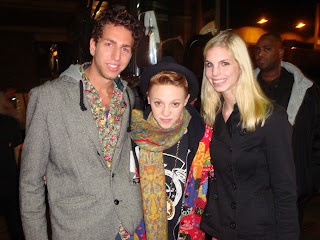 the show. “I was nervous because I heard stories about New York audiences, people said they’re not going to move, they just stand there, but it wasn’t like that at all.” Proof that New Yorker’s will dance, when the mood strikes us. La Roux has such an enthusiastic fan base, it’s no wonder her popularity has soared the way it has this past year. People love her individuality, and of course her music.

Now lets hope La Roux’s immune system is a bit more ‘bulletproof’ so she can rest up and perform for the rest of her tour!

See photos of the show on my Flickr. Tour dates for The Gold Tour here