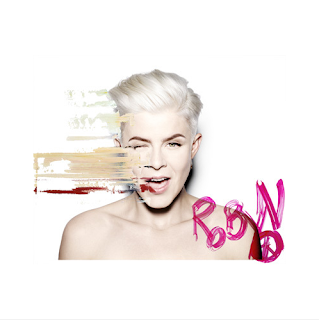 Swedish sensation Robyn painted Gotham red last night.  Playing a dynamite set at Terminal 5 (with openers Natalia Kills and Maluca), she sang numerous hits for a full 90 minutes.  Kicking things off with “Fembot” Robyn opened with the line “I’ve got some news for you,” announcing she had entered the building.  Robyn had her body talk throughout the night, hip-thrusting, fist-pumping and twirling all over the stage.  Her mechanical looking name decorated the backdrop, while two giant pin-wheels flanked the stage and strobe lights flashed every which way.

Wearing a white bullet bra, high-waisted blue and white pants and Jean Paul Gaultier shoes, Robyn looked her fashionably bold self, while her band donned white jumpsuits.  A couple songs into the set the singer paused and explained that she was wearing Jean Paul Gaultier shoes which she had intended to wear the whole night, but announced defeated, “I can’t do it” and told her band to “do something while I change my shoes.”  After switching into platform combat boots, she was ready to jump right back into the set.  Playing all her hits including “Dancing On My Own,” “The Girl and the Robot” and “Love Kills.”

Halfway through the girl got hungry.  Her body was talking and it wanted a snack, so from some place on stage she picked up a banana, peeled it, ate it, and chucked the skin into the audience.  I wonder who caught it–and if they kept it?  I believe this was during “Dance to the Beat / Don’t Fucking Tell Me What To Do” which given the title, seems appropriate.

As the second ticked down Robyn ended the set with the clincher “With Every Heartbeat” leaving fans begging for more. She didn’t have them grovel too hard. Returning to her devoted followers, Robyn performed four more songs including “Hang With Me” and “Konichiwa Bitches.”  Praising her love for New York and her fans she left the stage once again, to a ceaseless sea of cheers demanding still more.  And then to appease the crowd, she returned again.

Yes there was not one but two encores.  Singing a cover of Abba’s “Dancing Queen” she tactful shifted into her 90’s hit “Show Me Love.” It was the sweetest way to end what was an indomitable show. Even after the lights went on and the room began to clear, people still remained – dancing and basking in the after glow of the concert.

One more interesting thing to note of the show, there was a promotion that in exchange for purchasing one of Robyn’s CD’s you could score a meet and greet after the show.  It’s a creative way to sell CD’s, because there is a strong WIIFM (what’s in it for me) deal that customers get from it.  Fans are always more likely to purchase merchandise after the high of a concert, but a guaranteed opportunity to meet one of your favorite artists for a small price? Golden.  It’s a win win for both parties.  Fans get to meet someone they admire, while the artist not only gets to make a profit off their CD but also interact with their fanbase, which will only be strengthen and expanded.  Every fan is going to tell all their fans they got to meet the artist, and if there’s a picture involved, it’s going to be blasted all over facebook and every other form of social media they use.  Robyn scores high marks all around, not only for being amazing live, but for knowing how to market herself in fresh and creative ways.