SummerStage has been putting on a lot of great shows for its 25th anniversary, including the one last Sunday night with Jack Peñate, Chairlift and The xx 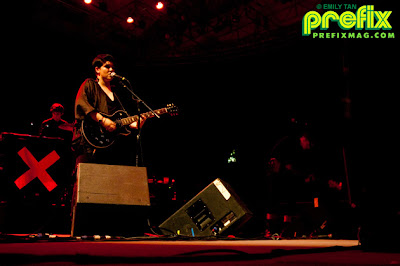 Jack Peñate started off the night.  He gave a good effort but seemed to stumble over some higher notes which I wasn’t sure was due to a cold, nerves or a mix of both. Dancing around the stage he did his best to rally the crowd, but the large venue seemed to swallow him up a bit.  I’ve heard great buzz about Jack and do like some of his recordings (like this and this)  but I wasn’t blown away by his performance.  I think a more intimate, indoor venue would have suited him better, but he gets bonus points for the cute accent.

Following Jack, came Chairlift.  Playing a couple songs before launching into their popular favorite “Bruises” they pulled out all the stops right from the get-go. Twirling around in floral dresses, some with wreaths on their head, they played up the happy hippie persona as they played their poppy-synth tunes.  Playing some new material from their upcoming album, they seemed to be moving in a more slowed-down direction.  Warning the crowd Caroline Polachek asked “You guys can handle it, right?” The release of the new record will tell.

Once the sun went down, the black canvased stage stood empty with a giant x taunting the eager audience with who was about to play next.  The venue swelled to capacity, spilling around the perimeter as people tried to catch a glimpse of the stage, or just listen on the periphery.  At precisely 8:45 the witching hour struck and The xx took to the stage.  Aware of the masses that had traveled to the park to see them play, they expressed their appreciation for playing more shows in New York than anywhere else, and their excitement for playing specifically SummerStage.

About half a dozen skinny vertical rods lined the stage, producing an infectious light show paired to the music.  Changing from rainbow colored, to black and white, from bursts of light to waves of motion, it was a complete sensory experience.

I have to say I was a little skeptical at first about how they would be live, but I was impressed.  They played hard.  Their sinister demeanor, breathy voices and alluring melodies were accentuated by the rustling trees and twilight.  Setting the mood, a span of the audience revealed more and more couples canoodling to the soundtrack of The xx, while others happily bobbed their heads and sang along.

Like bats in a cave, the full potency of The xx is not unveiled until after dark.