It seems like nobody can stop talking about the Grammy’s this year and the unexpected wins.  For some the outcome was a big upset for many, while others found it ground breaking at an award show that seems to always reward the biggest name.  So Justin Beiber didn’t win best new artist, if he’s good enough to stay in the game – which many believe he is – then his time will come.  Neil Young and Mavis Staples won their FIRST ever Grammy’s this year and do you know how long they’ve been recording for? The iconic Bob Dylan who performed this year didn’t win his first Grammy until 1980, and he released his first record in the 60’s.  There are many great, deserving artists who have had to wait to get their Grammy, but I digress. 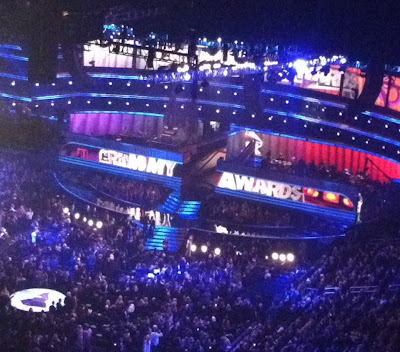 Now I’d like to talk about the Arcade Fire for a moment. Everyone seems to be freaking out about their win for Album of the Year because they never heard of them? Well what does that have to do with the quality of their music, or their songwriting or anything else?  I’ve heard of the Arcade Fire and I’ve heard of Esperanza Spalding.  True music fans, who spend their time seeking out new music, going to live shows every month, even writing about it on a blog, know who these artists are.  If you spend your time listening to anything outside of your top 40 radio station, you know who these artists are.  So instead of getting riled up, why not take a moment and say hey, let me see what these artists have to offer? If they won, against all these other artists I like, then something should be said for that–right?

The case for the Arcade Fire:

1. They’ve been around
The band has released three albums since 2004 (first ep was in 2003) and for an indie band have done consistently well. 2010’s The Suburbs was #1 on the U.S. Top 200 and sold nearly 400,000 copies as of press time.
2. They have a reputation
Since 2006 the band has received 3 Grammy nominations. This year they were nominated 3 times for Album Of The Year, Best Rock Performance By A Duo Or Group With Vocals for The Suburbs’ “Ready To Start” and Best Alternative Music Album, a total of 6 nominations, and their first win.
3. They have a huge fan following
Just this last summer the band SOLD OUT two back to back shows at Madison Square Garden, that’s a lot of fan muscle for an indie band signed to an indie label.
4. They’re Innovators
For the music video for “The Wilderness Downtown” the band utilized technology to create an experience that was personal and interactive.  It starts with the viewer entering the address of their hometown, and as the video plays out clips of one’s neighborhood taken from Google Earth emerge on the screen, creating a video that’s nostalgic, cutting edge and captivating.

So what’s different about the Grammy’s this year?
The top four categories: Album of the Year, Record of the Year, Song of the Year, and Best New Artist have always been chosen by a select blue-ribbon committee, with the power to overrule the Recording Academy members voting outcome.  Little is publicized about this committee but among nominees attending the Grammy’s this year, word of it was discussed and I was there to hear about it.  (With a little digging I found a few sources mentioning the process including an article in Slate and The LA Times.) It is my understanding however that changes were made to the blue-ribbon committee this year which is why their were so many ‘unexpected’ winners at this years awards show, especially for those top four categories including Arcade Fire’s win for Album of the Year and Esperanza Spalding’s win for Best New Artist.

As NPR mentions “the Grammys tend to reward top-selling acts signed to major record labels, regardless of musical merit” but not this year.  Esperanza Spalding is the first jazz artist to ever win Best New Artist – pretty historic. Jazz is an American art form originating in New Orleans, and Congress recognizes jazz as a national treasure but when it comes to American awards shows such as the Grammy’s – all previous recognition has largely happened during the pre-telecast, so from a cultural standpoint I say it’s time a jazz artist was given the spotlight.

The changes made to the Grammy’s this year proved to be a great success and it shows that the Grammy’s are, if anything, more in touch than out of touch with the current musical climate:

What the Grammy’s got right:

1. For one thing, the show became less predictable, with awards being given to artists for reasons beyond popularity.
2. It shows that underdogs like Arcade Fire, Lady Antebellum and Esperanza Spalding have as much of a chance at winning as the major pop/hip hop artists do. The indie/major playing field is evening out.
3. Live streaming on their website and YouTube allowed everyone access to all the Grammy events including the Nominees Reception Saturday night and the Pre-telecast Sunday afternoon.
4. Electing official Grammy bloggers and interactive social media content allowed them to connect on a greater level and build stronger relationships with music fans.
5. All these changes resulted in the highest ratings for the Grammy’s since 2000 with “an average audience of 26.66 million viewers, and a 10 rating in the 25–54 demographic, giving the show its best tune-in since 2004” according to Nielson.

All in all the 53rd Annual Grammy Awards had a stellar lineup of musical performances from the the hottest pop stars like Lady Gaga and Justin Beiber to legendary icons like Mick Jaggar, Bob Dylan and Barbara Streisand.  They really out did themselves this year with the musical guests, the spectacular sets and the chosen winners.

So, what are your thoughts on this year’s Grammy’s?