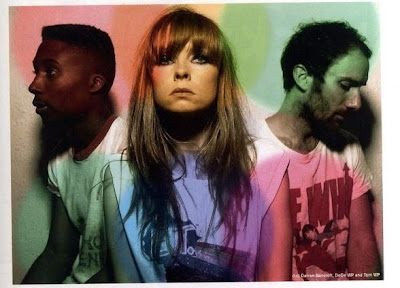 We Have Band have Brit electro-pop pinned. A dark withdrawn mystique similar to Karin Dreijer Andersson of Fever Ray, We Have Band capture fans curiosity. They played to a packed room at Santos, part of the CMJ showcase, on Saturday night all dressed in white (a nod to club owner Andrew W.K. perhaps?); Dede (vocals, percussion) wearing sparkling silver leggings and a zip-front leotard. Dede fixes her eyes on the crowd when she plays, staring wide-eyed and vacant. Hypnotizing, it’s hard to break away from Dede’s fiery stare. It’s as if she is looking at everyone and no-one at the same time. While Dede stares, Darren brings the energy and Thomas brings the accompaniment. The trio has stage presence.

Their ‘disco-rock’ (as they describe themselves) strains should be played loud and accompanied with sure-fire dancing and head thrusting. And maybe some neon lights. They remind me a bit of Joy Division and clearly I’m not the only one who thinks so. As Live Nation describes, We Have Band “are an amalgamation of a disco Joy Division, Human League after the girls joined and “the sass of an East Berlin Ting Tings”.”

Don’t tell me that doesn’t get your ear canals amped.

The E.P WHB is out now. Tour dates here.

Hear It In The Cans