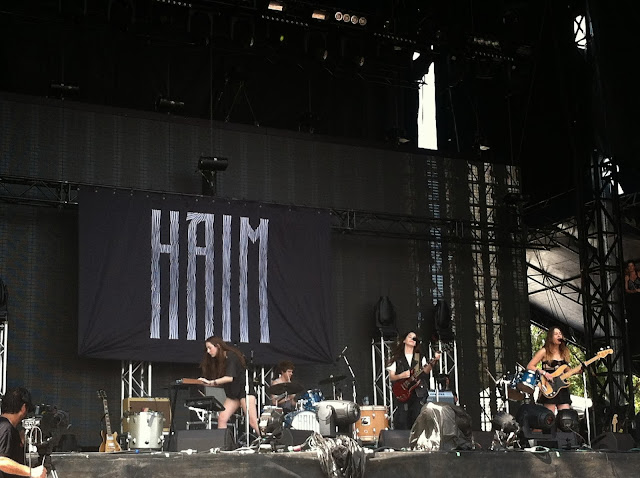 HAIM is in everyone’s ears and on everyone’s lips these days. They’re exquisite debut album, Days Are Gone dropped last week, making their ACL fest debut that much sweeter. The sisters showed off their mad skills, warm personalities, and made sure everyone felt at home. Specifically, the house they grew up in in California. Este delineated the audience saying, “you guys are by the dining room, and you guys are buy our bedrooms.” Then they announced, “this is what we did at home when our parents weren’t looking”, as they launched into a cover of Fleetwood Mac’s “Oh Well”.

At one point Alana jumped off the stage and ran over to fans, arms out, giving high fives.
She and I exchanged a solid high five.

ESTE-ISMS
Este Haim is definitely the most vocal (at least on stage) of the three, periodically cracking witty remarks with her sisters and the audience. I decided during the show that there should be a site dedicated to Este-ism’s (maybe there already is, I haven’t checked). All I’m saying is book deal. For now, here’s a few gems from their ACL Festival weekend one set:

In response to Elana’s comment on her revealing cut-out dress: “Shirts are for work. This isn’t work, this is fun.”

To the photographers: “I hate to see you go but love to watch you leave. Know what I’m saying? Keep that ass tight.“

“I need someone to hold hands with me while I watch Kendrick Lamar. We can hold hands together.”

“It’s hotter then balls outside. You think I’d be used to it being from L.A.”

Throwing their water into the crowd, “Can someone get water for everyone please?”

Official ACL After Party at Malverde

The night before, Este DJ’ed an ACL after party at Malverde. It was epic. Lady played all the best 80’s classics like Whitney Houston’s “I Wanna Dance With Somebody” and Cyndi Lauper’s “Girls Just Wanna Have Fun”. She also threw in some sass with Azealia Banks’ “212” plus Prince and Michael Jackson. Este closed the night with the “last song that was played at my Bat Mitzvah”, The Isley Brothers’ “Shout”. Needless to say, when it came time to be “a little bit softer now”, everyone was on the ground before jumping up in pure pandemonium, and yes, everyone was throwing their hands up.

Thank you Este for a night I’ll never forget and thank you HAIM for being the best. Let’s hang out again soon, K?