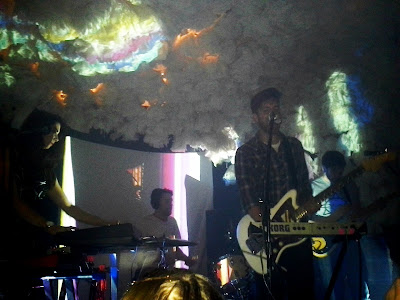 On An On were busy running around NYC last week, promoting the release of their debut album, Give In, with performances at Le Poisson Rouge, Glasslands and Rodrigue’s Coffee House
Sound Dessert was in attendance for the packed – if not at capacity – Glasslands show on Thursday night. On An On opened with “The Hunter” and included album highlights “All the Horses” and “Ghosts“. The atmospheric pop prompted a motley response, with half the audience swaying slowly, entranced, and the other half dancing wildly. A member of the latter was even passing out glowsticks, urging fans to form a “contigent’ at the front of the stage.
A highlight of the evening was On An On’s cover of Hot Chip’s “And I Was A Boy from School.” Lead vocalist/guitarist Nate Eiesland brought out his maracas (and dance moves), for what was a thrilling, upbeat rendition.
The entire set proved infectious as On An On let their personality shine through in their performance. Don’t pass up a chance to see them live.
And I was a boy from schoolcovergive inglasslandsHot Chip