Passion Pit and Phoenix performed sold out shows both Friday and Saturday night at Rumsey Playfield in Central Park. I was there Saturday night to take in all the synth-pop glory. The energy emanating from the audience was truly great. Everyone seemed riled up, jumping, dancing, cheering (smoking), and having a great time. 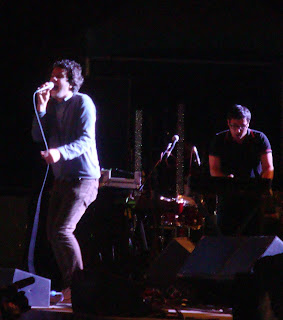 Passion Pit kicked off the night, and yes Michael Angelakos really does hit those high notes, even live. Impressive falsetto, sir. He also had a pension for picking up his mic-stand and raising it in the air throughout the night, not to mention the time when he acidentally knocked the stand down altogether. Passion Pit really got the crowd pumped and were pretty engaging with the audience, determined to have Saturday’s performance “be even better than Friday’s.” The audience determined to be crowned the more animated of the two, responded with tenacious shouting and applause. 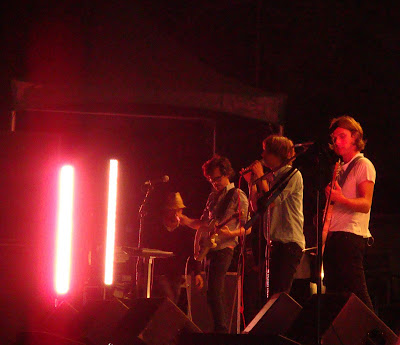 Now that the crowd was warmed up and feeling good, it was time for the Parisians who have caught everyone’s attention: Phoenix. Speaking of attention, yeah Mischa Barton (of the OC and short lived TBL: The Beautiful Life fame) was there chilling in the VIP section, and it was rumored that Kirsten Dunst went to the Friday performance. But moving on, Phoenix delivered a terrific show. The light display was stellar. Flickering bold neon lights, flashing bulbs, circling spotlights, wonderful. Jumping right into things, Phoenix opened with crowd favorite “Lisztomania” and ended the set with the equally popular “1909.”

After the show I chatted briefly with drummer Thomas Hedlund, who unlike the rest of Phoenix, is actually from Sweden not France. Thomas said he met the guys in Sweden when they asked him to join the band, and he’s been enjoying the ride ever since. Before joining Phoenix, Thomas previously lent his drumming chops to bands like The Perishers and Cult of Luna. Thanks Thomas for the chat, it was lovely to meet you!

So that’s my Saturday night run down. A memorable show it was indeed!