It’s going to be a frightening weekend (especially since 3 inches of snow is predicted for Saturday). But let’s forget the cold front, here’s where to get your fright on in NYC this weekend. 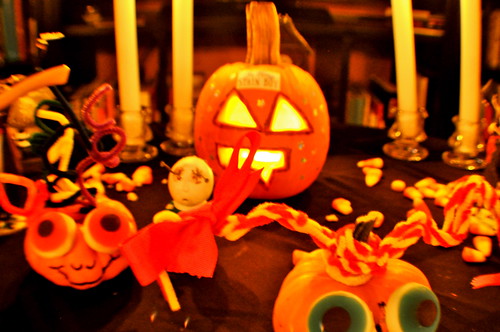 “A marvellous and mysterious event…a Halloween celebration of the extravagant and the grotesque…an all-night spectacle of atmosphere, costumery and diverse entertainments…an explosion of live music, dancing, circus arts, fire and late-night revelry, snake-charmed into an absinthe-fueled early-morning speakeasy.”

Halloween Freakfest
“Part of a series of free shows that celebrate the vitality and creativity of the counter cultural scene that has survived on the L.E.S., despite the rampant gentrification, soaring rents and lost venues that have contributed to the cultural genocide sweeping New York City. Bands: Lunch Lady, Ritz Riot, Ghouls Night Out, Jessica Delfino, Dethrace, Marni Rice, and Skum City. Performances and speakers: Jennifer Blowdryer, GLOB (Gorgeous Ladies of Bloodwrestling), Nina Spierer, John Penley, Katrin Hier, and DJ Mike SOS. We will be using the big, covered stage on wheels for this. Plus: punk rock art and vendors: Rat Bones’ Pitwear, Our Lady of Perpetual PMS, and Calamity Industries. Costumes encouraged. Afterparty 7-10pm at Double Down Saloon, 14 Avenue A bet Houston & 1st, with costume contest with ridiculous amounts of prizes, including a free bar tab. Judged by PMS, Mike SoS & the public. (Tompkins Square Park, enter on East 7th Street and Avenue A, 1pm-7pm, FREE)

The End of The World Party
Horror makeup artist, DJ Klever, Nick Catchdubs, and Jubilee on the decks, Zombie Death Punch & more
“Zombies are taking over and this Halloween we have realized that THIS really could be, The End of the World. So what better way to meet your maker than to party all night long.”
Brooklyn Masonic Temple
317 Clermont Ave

Heloise & The Savoir Faire perform a Halloween show at Cameo in Brooklyn with 33Hz and Infernal Devices. 8pm, 21+, $10

Rockstar Funeral at Le Poisson Rouge
“Nasty Mondays is back in NYC with their Halloween special, the Rockstar Funeral. Come get dressed up as your favorite dead rockstar and hit New York’s dirtiest rock and roll party on Monday, October 31. For just over a year Nasty Mondays has been invading New York monthly, taking a break from their legendary weekly parties in Barcelona. For Halloween this year Nasty Mondays DJs Max, Sören, and Ivan Rodriguez are teaming up with Oh! You Pretty Things for the best spot to hit on Halloween with  two parties for the price of one. Nasty Mondays will bring their signature mix of 50s rockabilly, 80s new wave, 90s grunge, and indie rock to The Gallery at LPR, and in the main room Oh! You Pretty Things will host a party they’re calling Life is a Cabaret (themed after the film Cabaret). Hit LPR on Halloween for the most debaucherous evening of Halloween fun you’ll find in the city.”  Doors at 9pm. 21+ with I.D.