Get Some! Some music news that is…there are so many new releases coming up, I’m getting excited and I can’t wait to get my hands on some of these songs.

My favorite duo The Ting Tings recently recorded an electro-dance number for Tommy Hilfiger’s new fragrance LOUD (for him and for her).  Fun and poppy, download “We’re Not The Same” here. (via NY Post)

In other exciting news Lykke Li is coming out with two new singles as well! The songs are titled “Get Some” and “Paris Blue.”  Treat your earbuds to these tasty tracks on October 25th.

The electro-luminaries We Have Band are on tour! Catch them in a country near you: UK, France, Germany, Switzerland, Belgium, Netherlands, Sweden, Norway, Italy, Spain, Portugal, Turkey, Romania, Poland, Russia, and Latvia. 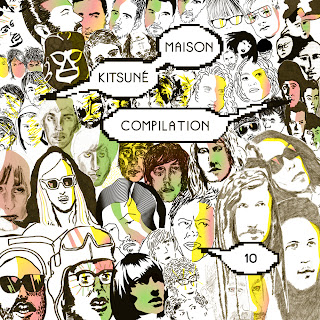 And last but not least: French favorites Kitsune are releasing The Fireworks Issue their 10th compilation!  Two Door Cinema, Digitalism and Yelle make appearances as well as Is Tropical, Kitsune’s newest signed band.   Some of these sound really promising, I can’t wait to hear the compilation in its entirety.   Read up on the featured artists as listed in the press release below:

CD1
1 – Cacadeur – “Walker (Early Remix)”
French. Gentle. Atmospheric. Dream-like and almost sad. Five years in the making. The CQFD prize of (French weekly) Les Inrockuptibles. A good start to the power of ten.
2 – Guards – “Don’t Wake The Dead”
Americans playing garage-rock. Typical NYC brutal energy. MGMT, Chairlift & Cults are friends and contribute to their recordings. Richie, the guy behind it all, posts free tracks on line. A bit of catching up for those who don’t have internet at home, or the right bookmarks or the time even.
3 – Is Tropical – “South Pacific”
The last band signed to Kitsuné. With an impressive masked look (watch those hands whilst on stage). Brilliant sound. Play this track a thousand times, we have.
4 – Yelle – “La Musique”
Always and again and again. We put out her first single. Here she’s produced by Germany’s Siriusmo who’s a bit of a don. We like Yelle.
5 – Two Door Cinema Club – “What You Know (Mustang Remix)”
An italo-disco remix by the Mustang djs from Bruxelles. Two Door Cinema Club is booming. « One of the most loved bands in the UK » as read in the NME last week.
6 – Beatacue – “Disque Oh”
Our new favorite kids. From Caen and not even eighteen yet. They’ve remixed Kylie, Two Door Cinema Club and released their debut single on Kitsuné in april 2010.
7 – Strange Talk – “Climbing Walls”
Straight from Melbourne, Australia. Alt pop, as they say there. Sounds like vitamin C. No embarrassment or inhibitions here, this is solid FM music as we like it.
8 – Punks Jump Up – “Blockhead (Edit)”
Good London djs with consistent track record. They’ve remixed Robyn, Yelle and Kele. Typical 3am peak time when the dancefloor’s rockin’.
9 – The Aikiu – “The Red Kiss”
French. Rankin shot the video. Nile Rodgers gave his blessing. And voilà !
10 – Flight Facilities – “Crave You (feat. Giselle)”
A cult classic that’s tailored to cross-over and turn into a summer hit. A song as safe as a white t-shirt. The people in the know love it, but then again you don’t need to be in the know to get it. More Aussies. There’s good stuff in Australian orange juice at the moment, isn’t there?
11 – Jolie Cherie – “Insomnie”
Because finally some French people – namely Melina, Samir et Etienne – have realised that a French band name is also very good.
12 – Wild At Heart – “Get Related”
Erik & Li are Swedish messengers of what some call slow-pop, pop although you could simply say they have charm.
CD2
1 – Clock Opera – “Once And For All”
Great lyrics, music shot on wide-lens, the kind admen will soon steal for their car or friendly banks ads. The electronic Coldplay? And we’re not even joking.
2 – Icona Pop – “Manners (Extended)”
Two Swedish girls who want the world to sing along to their heartbroken songs, dark feelings and brief euphoric moments. Rugged and persistent.
3 – Young Empires – “Glory Of The Night”
A young band formed last October and already celebrated by the blogs, unsurprising considering the amount of teenage sensuality at work, shadow play frolics and the likes.
4 – Housse De Racket – “Chateau”
The French band with the strangest band name since The Doors turns up with a very, very good song, which predicts a very, very good second album… keenly watched by Kitsuné.
5 – Teeth – “See Spaces”
Ximon, Simon and Veronica warn in their official biog: “We destroy anything we touch. All our equipment’s ruined, the sound blows out everywhere we go.” Made us want to listen. They produce themselves their own videos, pictures and fanzines…
6 – The Heartbreaks – “Liar, My Dear”
British pop as we love it. Spicy and lyrical. They’re The Drums’ favorite band, so there.
7 – Waylayers – “Fires”
Harry, James, Jon and Alan form a brand new band fresh out of Harry’s bedroom, they have a sound that demands attention, ever so particular that their early demos instantly attracted attention.
8 – Digitalism – “Blitz”
Solid track that combines grace and strength, in some kind of trance. The track is called ‘Blitz’ and was indeed designed to slay dancefloors.
9 – Black Strobe – “Me & Madonna (Twelves Remix)”
The 2010 remix of their cult hit ‘Me and Madonna’ which was bang on at the time. It’s remixed by Kitsuné’s favorite Brazilian producers: The Twelves.
10 – Justus Kohncke and Alexis Taylor – “Sorry”
This talented yet underrated German producer (he is disco!) teams up with Hot Chip’s Alexis Taylor for a lo-fi slice of heavenly soul. The rest of the band will be jealous.
11 – Psychobuildings – “Terror Management”
They’re from Brooklyn (who isn’t these days? it’s a joke). Peter, Peter and Juan are on a dark wave tip. That video they had on YouTube where a guy’s dancing to the track wearing horrid pyjamas in an American Apparel shop kinda made us want to sign them. We thought wow, you got to believe to go through all that.
12 – Palbomen – “Moon Children”
It’s one boy on his own, Kai, with a lot of synths. Perfect track for mornings when you’re deciding which Kitsuné shirt to wear.
13 – May68 – “The Prisoner (Cecile Remix Jerry Bouthier Edit)”
To start with it’s a great band name with all its generational implications (May 68 is the date of the student uprising in France). Camille, Matt, Owen, Jonny and Jude (the vocalist, from Sheffield) are behind this Manchester band that fuses dancefloor and pop sensibilities in its own inimitable way. Remixed here by Cecile, the rising producer from Milan.
Kitsuné Maison 10 The Fireworks Issue is released November 15 (Digital) and November 29 (CD)