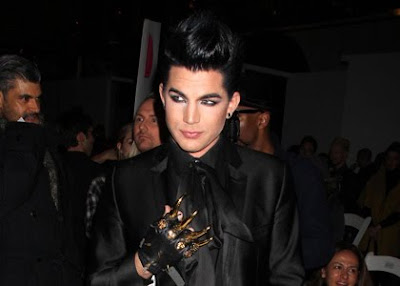 As everyone knows, last week was fashion week.  All the designers, models and celebrities hit the icy New York pavement to check out the hottest fashions at Bryant Park and the event hotter after parties. One of those show-stopping parties was The Blondes post-show affair at Juliet.  Always a place to see and be seen, this night especially had a few familiar faces.  Among those spotted: Matthew Settle (Gossip Girl’s Rufus Humphrey), Aminat from America’s Next Top Model, and none other than American Idol runner up Adam Lambert.

While I am not an American Idol fan, Adam Lambert got me hooked to season 8.  I would tune in (via (You)Tube) just to watch his performances.  While I love my indie and electro, I also love my hip-hop and pop — especially when I’m in the mood to dance. I love to start a night out with dance-pop ditties analogous to Lambert’s debut album For Your Entertainment.

Needless to say, when I saw Adam at the party that night I was pretty excited.  I decided to approach the black haired, black garbed singer.  I introduced myself and teasingly said if he was straight I’d ask him out on a date. I then asked for a picture.  Adam turned me down, saying he had taken too many photos that day.

I admit, I was disappointed, but hey at least I asked.  I could get over it.  That is until I saw Adam later on in the night posing in front of flashing cameras.  Since I wasn’t a professional photographer I wasn’t worthy of two seconds of face time? I’m just saying, if you tell someone you’re done taking photos for the night, don’t turn around and pose for someone else’s camera.

Let me reiterate that this was fashion week and the Blondes after party.  The majority of people at the party were fans of the designers or in the industry themselves.  So while Adam stood out, he was not the center of attention. And let me remind Adam that he got voted to the final round of American Idol by fans.  Not by Paula, or Simon or Randy.  So the next time you choose to snub a fan in favor of the limelight Adam, remember who your supporters are.

For one quick flash of the camera I could have written a glowing review of the night. Instead here I rant, finding Glambert much less entertaining.