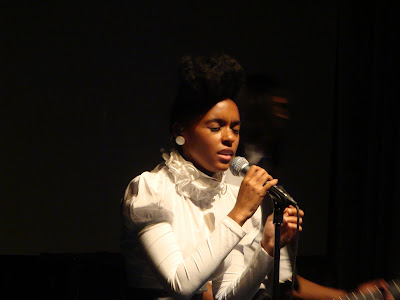 Janelle Monáe, ?uestlove, free food and free drinks. All to good to be true? For a lucky few hundred, no. ScanScout, a video advertising company, hosted the event at the Edison Ballroom Wednesday night, which was too good not to remember. Starting the night on a high note, ?uestlove kept the adrenaline high with a DJ set mixing classic oldies with top 40 hits.

After everyone had a handsome helping of libations it was time for the big event of the evening: Janelle Monáe. An intimate performance by a lady destined for stardom, and an unobstructed view right upfront was incredible. As the lights dimmed the words, “The Archandroid” appeared projected on a screen. Sweeping across the stage, a row of grim-reaper caped figures waded in the shadows. Then emerging from the darkness and removing the hood, was none other than Janelle Monáe who immediately exploding into song and dance.  From pharaos to the cosmos, a variety of images flashed across the screen behind her.  Backup dancers went from being dressed in capes, to masks, to tossing carnations into the audience. 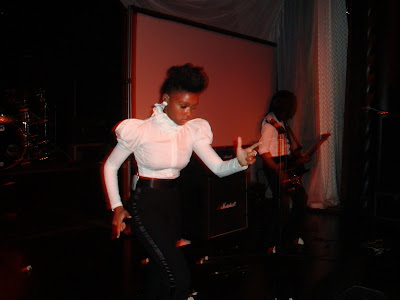 Janelle wore her signature tuxedo style look (black pants and a white puffy-sleeved oxford), and a towering bun on the top of her head.  With a very petite frame, the power of her voice and her captivating stage presence is even more disarming in person. She sang a number of songs from her new album The Archandroid including “Faster,” “Cold War” and “Wondaland.”  Her 60’s pop/hip-hop style creates an infectious blending of styles. Not being one to disappoint, she ended the dynamic set with her hit “Tightrope.” Needless to say she lives up to the hype.  This girl has undeniable talent vocally, lyrically and creatively. A flawless performance she had everyone under her spell.

In her bio Janelle describes the new album as thus:”Musically, The ArchAndroid is an epic James Bond film in outer space,” describes Monáe, “in terms of influences it’s just all the things I love— scores for films like Goldfinger mixed with albums I adore such as Stevie’s Music of my Mind, David Bowie’s Ziggy Stardust, and jamming experimental hip hop stuff like Stankonia.” Her music definitely has that larger than life feel to it.

What’s her hope for those who hear her music? To “embrace their own superpowers and become the voice of change, the hero—or The ArchAndroid—in their own communities.”

To see more pics from the concert check out my flickr.