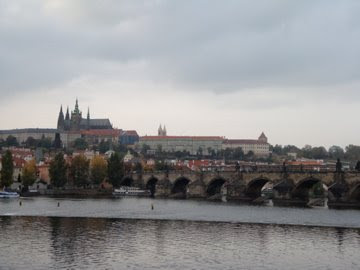 I have settled back in London town after a wonderful few days in Prague. What a beautiful and vibrant city. Some things I took away from my trip? Churches, winding cobblestone streets, Kafka, Mucha, honey cake, and country music. The Czechs love their country music! From the Cowboys bar to the Country Music Saloon, to the dress of the people, country music is an integral part of the culture.

Intrigued, I wanted to know more about the history behind this passion for the western ditty. According to The Prague Post, Prague launched Europe’s first country radio station in 1991. They even publish country-and-western magazines. Their regard for this genre apparently emerged in the 1940’s, when the (now) Czech Republic was under communist rule. To the Czech people country music was a taste of freedom; something they could relate to.

Walking around Wenceslas Square on Thursday night I stumbled upon some live music: a country band was performing on stage. An elderly monk in orange robes found them irresistible. Dancing and jiving as everyone watched, he practically stole the show! It was a memorable encounter. To see a brief account of what went down watch the video below: