This week was filled with nonstop showcases and parties all surrounding none other than CMJ.  The whole city was overrun with artists, industry types, hipsters and curious spectators alike.  Basically a typical night in the lower east side but 5 fold.

I managed to go out and hit up an event every night, and am now in bed recovering from a week of too much boos, base and hearing that I will never regain.  Thus here is the rundown of my week and the most memorable moments of my CMJ.  Were you in the heart of the festival? Share your favorite bands, venues, panels, etc in the comments!

To kick off the week I started out at the MOG CMJ launch party at Brooklyn Bowl.  For those of you who’ve been there you know it’s a giant, beautiful space.  Filled wall to wall with people, everyone came out to see Screaming Females, DOM and Yo La Tengo perform.  After Catching DOM’s set it was off to the Lower East Side’s Living Room.  Inside was the delightful Chamberlin who played a collection of indie, folk rock songs, including a wonderful cover of the Kinks “Strangers.” They sounded really crisp and polished.  Marc Daly (I think that’s the lead singer–its not specified on their myspace or facebook) has a rich husky voice that tantalizes the ears–Chamberlain was a sweet discovery amongst some of the noise that infiltrates CMJ. After their set it was time to head over to Backstage Bar for the Louis XIV set…except that when I arrived I found out that they were not performing but playing a DJ set, and that they weren’t going to be on for another hour and a half…and then I discovered CMJ made a TYPO on their website and that Louie XIV who is an actual DJ was the one spinning…not Louis XIV.  Sigh–don’t you hate when that happens?  Crushed I decided I’d seen enough for the night so after catching some of Tecla’s set, I headed home.

Due to personal engagements (birthdays and the like) I didn’t make it out to that many showcases Wednesday but I did hit up Kenny’s Castaways to check out the Click Clack Boom. I was also able to squeeze in a panel that afternoon on Music Supervising.  Especially impressive was Blake Leyh who spoke of his work on the HBO series Treme.  All the music is filmed live and integrated into the scene, so capturing the sound requires meticulous timing and mic placement.  Check out the series here.

Finally I hit up the CMJ Purevolume artist lounge after attending another party.  A steady stream of live music accompanied open bar and all the free pop chips you ever desired…and that about sums it up in a nutshell. Moving on… 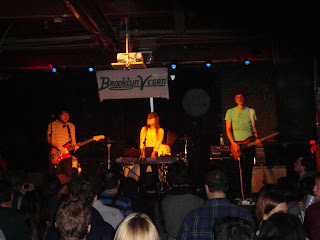 Going all out, I went to panels during the day and showcases all evening/night.  I checked out the BrooklynVegan showcase at Williamsburg Music Hall and saw Asobi Seksu perform.  She is adorable in person and a great live performer. it was a great set.  Also caught John Vanderslice perform which is definitely one of the most memorable of the week.  Gotta love a voice like his.  He was really warm and excited to be playing.  For his final songs John got off the stage and took to the floor as the audience formed a circle around him.  Joined by a guy on trumpet (who John said he met right before the set) and a guy on accordion they had the perfect spotlight, thanks to a guy in the crowd who wore his digging light to the show! It was a great moment and a great way to end the set.  In the next room DeVotchKa were starting their set of amped up gypsy rock.

Following the BrooklynVegan showcase I made my way to Webster Hall and saw Jon Hopkins and Four Tet throw down some heavy house music (really heavy–I think my ears were bleeding afterward).  Finally I headed over to Ace of Clubs for Tatiana Kochkareva’s set! Strong, powerful and stirring she put on a killer show

I finally made it to an Oberhofer showcase who played Bruar Falls on Saturday.  On stage he announced he played about 10 showcases total for CMJ which is crazy.  He is definitely on people’s radars and rightly so.  It was loud. It was fun. Things broke. In sum it was a great rock show.  He is an artist to watch, so be sure to check out his stuff!

So that commences my week of CMJ.  I managed to balance out the marathon while keeping real world commitments (work, keeping friendships, etc) intact–for the most part.  Many had much more endurance than I (though do these people have day jobs?) and many less so.  Either way I gave it my best, and look forward to doing it all over again, bigger and better next year. Till 2011.