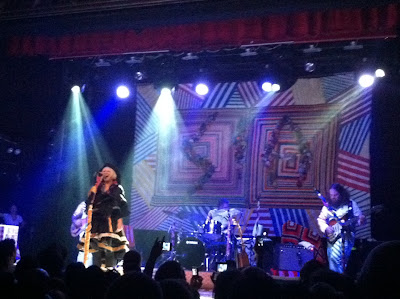 Wearing a black embroidered dress that appeared to be designed by Christian Siriano (who was watching from the balcony), Sia brought the house down at Webster Hall last night for the sold out show. Walking on stage with a giant smile plastered across her face, her love of performing shined through.

As she stepped on stage, fans gave her presents which she eagerly collected including a letter, fan, flower, earring and children’s book. “Maybe at the end I’ll read you all a bedtime story” Sia said, as she stored all the items in her dress (minus the book).

Opening with “The Fight/Buttons,” she also sang a cover of the Madonna song “Oh Father” and performed “Hostage” the amazing new song she recently wrote with Nick Valensi of The Strokes.

In between songs she would interact with the crowd, asking if anyone wanted to “shake weight,” attempting to see if a game of telephone would work, “nope, that was a fun experiment” and playing everyone a fun little ditty called “I Want To Pee On You.”

At the end of the set Sia announced that the band was going to play one more song and then walk off stage…and then come back on (she wanted the anxious people in the audience to know). For the encore she played the sprightly “Clap Your Hands” which hand everyone dancing – and clapping, and then wound it down with the emotive “Breathe Me” which made the room go completely silent.

I suggest everyone see her live, her amazing personality is a complete joy to experience as is her talent.

Opening for Sia that night was Mexican singer/songwriter Ximena Sarinana, and one of my favorites: Danish darling Oh Land.