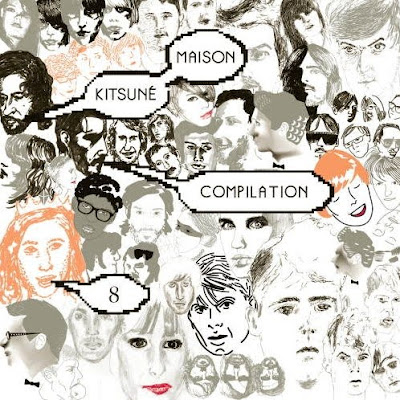 Kitsuné Maison recently announced news about their latest compilation to come out of the haus of Kitsuné . The eight installment, ‘The Chic and Nice issue,’ comes out mid November, and with Gildas and Masaya’s track record it of course will be life changing. Their previous compilations have aided in breaking out dozens of artists including Phoenix, La Roux, Digitalism, Heartsrevolution, Boyz Noise and Lo-Fi-Fink to name a few.

“The Kitsuné house is now packed with friends, girls and boys, new and old. Quiet girls, neurotic boys, Kitsuné mobilizes all that is most passionate and exciting.” Promoting the new compilation on their web site, it sounds like this chic and nice issue will have some exciting songs in store for all us eager fans out there. To catch people’s attention even more, and also shamelessly plug the Kitsuné Maison fashion line, the boys released a video featuring a quiet girl and neurotic boy: Axel Vs Elena. Both compete against one another to see who can get dressed and undressed in various pieces from the Kistuné Spring Summer 10 collection the fastest. In the end Axel and Elena seem to tie in their dressing skills, but their sportsmanship is commendable, the loser kissing the winner on the cheek after each round, followed by an awkward victory dance.

The soundtrack to this little competition are quick samples of songs to be featured on the eighth installment of Kitsuné Maison. The list includes:

Check out the vid!