Summer has gone and backyard activities, such as barbecues and sun bathing, suddenly seem distant.  David Chaitt, organizer of Backyard Brunch Sessions (where bands cook and then play an acoustic set in his backyard) has therefore shifted from backyard to front stage.

Too cold to play outdoors David brought his series inside the wondrous Brooklyn Bowl on Monday for Brunch After Dark, with performances by Arms, Fatty Acids, Canon Logic, Oh Land and The Courtesy Tier.  Five bands for five dollars.  A fantastic opportunity, given the lineup.

Brooklyn Bowl is a wonderful place to see live music.  Not only is the audio crisp and the infrastructure beautiful, but it feels great physically.  Open and spacious, even when the backroom gets packed, with all the open space around you (people bowling to the right, and dining down the hall), you feel like you can still breathe.

I arrived to the bowl around 9, just in time to see the Danish delight Oh Land perform.  Wearing black spandex shorts and a giant black Elizabethan-type cape, she looked flawless.  An electropop princess, Oh Land has a sweet sonorous voice which she supports with energetic symphonic sounds.  Fully in control of her musical vision she designed her own instrument — the “contraption.” About 5 feet high, the front lights up like a Tenori-on, while the side supports electronic drums, which she played with drum sticks that looked more like batons.  Oh and the top of it was covered with white balloons that unexpectedly came to life as they were equipped with video projections.  With electric stage presence, the moment she appears you can’t take your eyes off of her.  Songs that got me hooked include the dance ditty “Son of A Gun,” the buoyant “White Nights” and the ghostly “Wolf & I.”

As for the name, if you are wondering where Oh Land comes from her full name is Nanna Fabricius Øland. So there you go, Øland = Oh Land.  Simple, straightforward and easy to pronounce for us linguistically challenged Americans. Oh Land plays Mercury Lounge on Monday, a show not to be missed for sure.

Following Oh Land came The Canon Logic.  Good ol’ rock and roll, the five Brooklyn-based boys have smooth harmonies with just the right amount of edge mixed in.  They have a nice versatility that includes harder rock songs like “Dead Man,” to quirkier indie ditties like “The Run” which seem to hark back to the Shins.   They just released their debut album in March and have received great feedback, including scoring a set at CMJ last month. 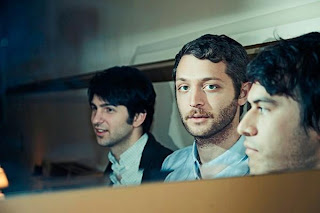 Ending the night on a high note, ARMS headlined.  Beautifully melancholy, Todd Goldstein has a magnetic voice that commands emotion from the listener.  Listening to ARMS feels like going through a good breakup where the end hurts, but you would do it all over again.  Your emotions creep to the surface, as ARMS sings slightly heartbreaking songs, that are bewitchingly enjoyable.  The band has a beautiful way with words, lyrics that only true songwriters can create.  “Kids Aflame” especially resonates. The first verse reads:

ARMS will set your spirits Aflame.  The band is currently working on recording their second album, Summer Skills.  Something to look forward to during these cold months.

Five talented Brooklyn-based bands, one unforgettable night of music. One of David’s motivations behind these Brunch Sessions is to support the local community, local artists and embrace Brooklyn’s unique music scene. Through these showcases he is helping foster a camaraderie among musicians and fans.  Music fundamentally brings people together, so it seems only natural to want to nurture this element and contribute to building a supportive music community.  More Brunch After Dark sessions lay ahead, stay tuned for the next nigh of not-to-miss music.