Last weekend I was invited to attend Backyard Brunch Sessions hosted by David Chaitt. On the bill for the afternoon were The Spinning Leaves and Nicole Atkins.  When I arrived Nicole was busy in the kitchen preparing her dish for all the backyard attendees: pan fried artichoke in linguine and garlic bread.  Once everyone’s bellies were full, and the drinking was underway The Spinning Leaves took the floor for their acoustic set, followed by Nicole Atkins.  Both are skilled and intriguing performers. It was a rare treat to not only see such talent perform in such an intimate setting, but get to chat with them as well.  Thanks so much to Dave for organizing such a great series and inviting me to participate!

My interviews with The Spinning Leaves and Nicole Atkins after the jump:
THE SPINNING LEAVES 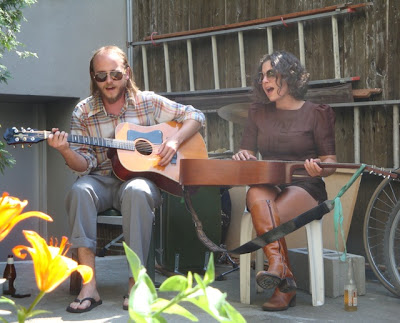 SD: What was your initial encounter like, when you decided to form the band?
SL: I (Barbara) first met Michael at my birthday party and we instantly hit it off.  The next day we went backpacking through the woods, we were talking and humming, and decided to form a band.  We muse off each other.  Talking that day we really felt like we were going to spark a revolution, and we feel we’re achieving that through our non profit and our music.

SD: What inspired the name?
SL: We wanted to convey something that’s beautiful and moving.  We were out in the woods and the leaves were all around us, spinning and falling and that’s where the name came from, being out there in the woods.

SD: I read your music gives back to the local community, for example supporting farmers. Do you use your music as a tool for philanthropy?
SL: We’ve started a non-profit called the Philly Folk Parade and have even played with the Philadelphia Orchestra because of it.  We wanted to build a supportive community for musicians and embrace the creative side of music that gets lost by big record companies only interested in money.  The Parade is a series at the World Cafe in Philadelphia that is presented to the public, we don’t want to be insular, we want to share what we’re doing.  As many as 30 people will be on stage singing, collaborating and playing off each other. We are a neo-folk family, and there is a lot of cross-pollination that happens between the bands and the people.

We’ve recieved a lot of support, and are continuing to grow. The Parade has bridged communities of people and artists.  We’ve established connections with people across the country. Because of these connections if you contact someone who knows someone in the Parade and say, I’m friends of say The Spinning Leaves, you’ll find yourself with either help booking a gig, a place to crash and/or a meal.

We are working on sponsorship so we can take it to the next level and go on tour. We want tastemakers and shakers to get involved and spread the word. We see the band and the non profit as a tool to build the artistic community 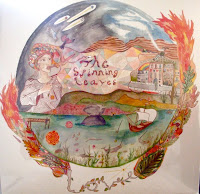 SL: Here is a vynl of out record Love, Salihah Moore designed the cover art

SD: Wow, thank you! What inspired the illustration?
SL: It’s our dreams

SD: How many instruments do you use in your music?
SL: Sitar, horns, pots, pans, stomping, laughing, everything. About 50 people contributed to the record, and you can see all the credits on the back of the album.

SD: From start to finish?
SL: Yes, people were involved in every process of the record. 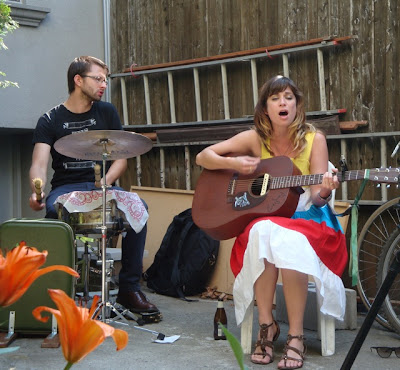 SD: How did you decide on the meal today (pan fried artichoke in linguine with fresh garlic bread and white wine sangria)?
NA: My family is Sicilian, but I actually have a friend who works at a restaurant in New Jersey called Giamano’s and they have an amazing recipe, so that’s what inspired my dish.

SD: Do you have a favorite family dish?
NA: My favorite is Sydney Stew, which has beef and tomatoes in it, and vodka sauce.

SD: What is your favorite food?
Cajun shrimp, especially from Rajin Cajun in New Jersey, pea soup and the food at the Windmill

SD: What food do you detest?
NA: Dumplings. They are too doughy.

SD: What was the album inspired by?
NA: A horrible breakup

SD: David Lynch is said to be one of your inspirations, how has he influenced your music?
NA: It’s moreso Angelo Badalamenti, Lynche’s music writer.  I love the way he can take something like a simple jazz line and make it sound sinister.

SD: How did you hook up with Regina for this tour?
NA: We both played at the Sidewalk Cafe and became friends. Lach gave me my very first gig there.

SD: Oh Sidewalk, do you know Randi Russo? I used to intern for her.
NA: Yeah I do know Randi, that’s cool.
SD: Yeah she has a new album coming out, small world!

SD: Do you consider yourself a part of that anti-folk scene?
NA: I started out in anti-folk but I don’t know if I fit in with it now, but I met a lot of friends through it.

SD: Is there a moment in your life when you knew your career was about to take off? How did you go from Sidewalk to say Bonnaroo?
NA: I was living in Charlotte in 2004 and was playing a lot of country songs, but I was writing a lot on my own.  I finally played my songs for a friend and I felt like they sounded like my brain.  My friend said to me “These are the songs you should be playing,” so we decided to record an album.  I thought “this is what I want to be doing.”  It’s the first time I felt like stopping people in the street and telling them “listen to this!”

SD: What is the biggest audience you’ve played to?
NA: When I played a few songs with My Morning Jacket at Madison Square Garden.

SD: How would you describe a quintessential summer day?
NA: If I were in Jersey I’d wake up and go to the Sunset Landing and eat a crab avocado omelette, then go canoing, followed by a bike ride, listen to James Brown, relax on the beach, drink, nap and then catch a show at The Pony.

If I were in Brooklyn then I’d wake up, go for a bike ride, have a picnic in McCarren and then see a show.

SD: What is your song of the summer?
NA: “Pull The Reigns” by Only Sun – Regina Spektor’s boyfriends band.