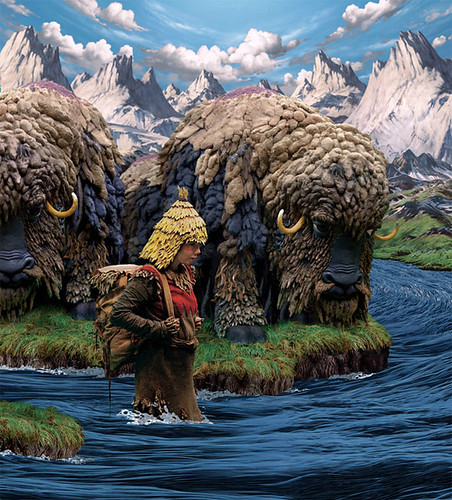 I am unofficially titling March 31st Björk Day. Scrounge through your drawers, run to your nearest geeky nic-nac store or send a letter to One Little Indian–or whatever it is you must do to obtain a pair of 3-D specs! Björk’s epic music video “Wanderlust” is here. Nine months in the making, this undertaking was constructed with the help of video directors Encyclopedia Pictura. Life-size scaled models, computer animation and a number of other means went into the creation of this 3-D spectacle.

The video was unveiled earlier this month to a lucky few at three select galleries in New York, Los Angeles and London. For the rest of us, Yahoo! will be premiering the visual feast. If only I could have made it to Deitch gallery in New York for the screening, even though things were delayed, it still would have been quite the night.

Music video screenings at art galleries? Björk is breaking the boundaries of what a music video is and can be. I hope this happens with videos more often in the future, I personally would love to attend something like that. Some videos, Björk for example, truly do end up being works of art in their own right. Take a look at the huge cast and crew that went into making this possible!

Stereogum is also releasing on this lovely Monday, a tribute CD featuring 11 artists covering her album Post. The album is available for download on their website.

In the meantime get glasses, get watching and get listening!

I will certainly be following up once I lay eyes and ears on this spectacle myself! Until then, happy Björk Day!