This is it. My list for best albums of 2010.  What are you favorites from the past year? Discuss below!

The Arcade Fire are genius. They keep getting better and better if that’s possible, and their third release is simply gorgeous.  Breaking new ground, they released an interactive video to coincide with their single “We Used To Wait.”  One of my favorite songs off the record is “Ready to Start,” the melody and lyrics are infectious.

I listened solely to this album for almost two weeks after its release. The National did a phenomenal job with this record. Every song excels with the same fervor. There’s no need for the skip button here.
17 England_The National by NotesbySpark

Who hasn’t fallen in love with Cee Lo’s latest album? His single “F**k You” even managed to make it’s way into everyone’s living rooms via Gwenyth Paltrow’s rendition on Glee.  Lady Killer takes on a number of meanings here, including Cee Lo’s effect on women and his conquering of the music industry.

Can this collaboration be beat? Danger Mouse and James Mercer – two musical prodigy’s together on one project. Back when the record was first released I said it was one of my favorites of the year thus far, and I continue to stand by that statement. An enchanting dose of Sci-fi, whimsy and mystery, the ethereal melodies mixed with James Mercer’s unequivocal voice are a bewitching combination.
#27 – BROKEN BELLS – The ghost inside by 60 songs in 2010 – A side

Love me some Vampire Weekend. Catchy and clever, their lyrics are smart and their melodies are fun.

Electronic dance dynamo’s, this album is an aural adventure.  The music creates a story as different rhythmic layers unfold.  Voyage into this fun house and allow yourself to get lost in the music.

Hot Chip has my heart. I have been a fan of theirs since day 1 and their fourth album did not disappoint. It merely enhanced my love for the electro-pop playa’s.

An infectious CD and a captivating performer, Robyn receives high marks for this dance album released in segments (there is also part 1 and part 2).  Each of them will get your blood pumping and make you feel like a “dance hall queen.”

Newcomer Janelle Monae to the R&B world by storm with her album.  A petite frame and a powerful voice this girl has talent, stage presence, dance moves and personal style to boot.  Big hair matched with form fitting 50’s style tuxedo’s, Janelle is the perfect combination of old and new.  Check out her amazing energy in this video for “Cold War,” filmed in a single shot:

I discovered this Danish delight a mere month ago, but she’s completely captivating.  This girl is going places. Keep her on your radar – with her fun poppy songs and killer style – once you discover her, you won’t forget her.

This album is filled with fun, airy ditties that beg to be played on repeat.

What is there to say? These two are simply dynamite.
The Black Keys – Howlin’ For You by simoncurtin

This girl is in a league all her own.  She’s not afraid to show off her individual style and personality and has scored tons of fans because of it.  Her rhymes are tight too.

Anything Jack White dips his hands into promises to be good.  His “side project” from the White Stripes, The Dead Weather once again came through with a delightfully rough rock record.

Husky Rescue are just that – a delightful Finnish band fronted by the precious husky voice of Reeta-Leena Korhola.

Sia shows off her versatility on this record.  Delivering her infectious dance tracks, while also revealing a more stripped down, vulnerable side on songs like “I’m In Here.” It’s a welcome contrast, showing the artist still has plenty in store for future releases.  In the meantime this is a great record to satisfy any mood.

I’m kind of obsessed with We Have Band. I discovered them at CMJ back in ’09 and have been recommending them ever since (I have succeeded in making my friends obsessed as well) A little electro mixed with a little techno and lots of heavy bass – it’s everything you need for a raging dance party or a pick me up when caffeine isn’t nearby. 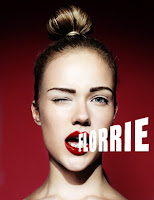 This 21 year old British beauty is another star on the rise.  A rich, luscious voice paired with pop melodies she reminds me a bit of Duffy mixed with Kylie Minogue. She’s got a bold, eclectic flair that definitely will get her (continued) attention.

Returning with a vengeance, the Scissor Sisters weren’t afraid to scrap everything and start over new when recording this album.  The results paid off, with Night Work capturing the glittering highlights of Disco that made this genre soar in the 70’s.

Goldfrapp knows how to create a great pop song. This album is filled with them.