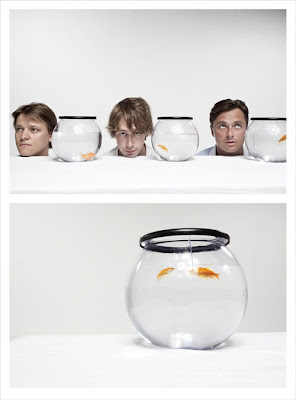 Seriously, are they trying to break a Guinness world record or something? No More Stories/Are Told Today/I’m Sorry/They Washed Away//No More Stories/The World Is Grey/I’m Tired/Let’s Wash Away, released in August, is Mew’s fifth album to date. Shoegaze on the rocks, this album is a pinch more poppy and breezy than previous albums. Covering “new terrain” the album still sings. The Danes continue to produce dynamic compositions, delivering a fresh, evolved sound. Teasing tech junkies with technology, the track “New Terrain” actually contains two songs in one. No, that is not Danish you’re hearing, but the warped vocals of the song “Nervous” sung in reverse. To play the number backwards one has to get a little creative with the computer; good luck to all of those who try. If anyone figures it out, submit it to me here at SoundDessert!

Another interesting thing to note about the record — two of the tracks are modified illustrations of the album cover. In other words, two track listings are images. What can I say, the boys keep listeners on their toes!

This is one band where the skimpy 30-second previews on iTunes really don’t do them justice. Listen to the songs in full. Music doctor’s orders.

Watch the vid for “Repeaterbeater,” the song amazes: