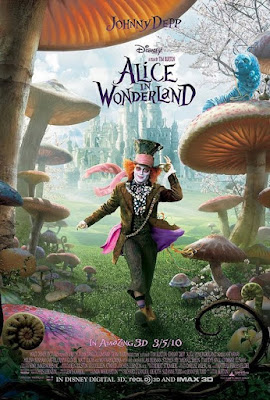 MySpace exclusively revealed the tracklisting for Almost Alice, the soundtrack to the much anticipated Alice In Wonderland today.  While I gasped at the news, I was even more surprised to discover who’s actually appearing on the soundtrack!  From what I know of the story and what I’ve gathered from the movie’s trailer, this lineup just doesn’t seem to be a fitting match.  Lewis Carroll and Tim Burton are heretics, triflers of the strange, worshipers of the imagination.  Given that combination, while Robert Smith glaringly stands out as an appropriate fit (ok and maybe a couple others), Metro Station and Plain White T’s fail to hit the mark.  Just not the lineup that comes to mind when I think of creative off-the-beaten-path artists.  The likes of Animal Collective, Imogen Heap, Arcade Fire, Sigur Ros and such just seem to jive better. But Mark Hoppus and Avirl Lavigne? If I was looking for a pop-punk marathon, I’d just buy tickets to the Warped Tour.
Looks like someone fell down the rabbit hole when this group was chosen.
Anyway enough of my gripes, have a look and see for yourself.  Do you think it seems like a good fit for the movie? Share your thoughts! Yes, I get very heated about these things.  I just think soundtracks hold such creative potential for artists, and can add so much to a scene/movie, I get disappointed when I feel an opportunity was missed.
1. “Alice (Underground)” performed by Avril Lavigne
2. “The Poison” performed by The All-American Rejects
3. “The Technicolor Phase” performed by Owl City
4. “Her Name Is Alice” performed by Shinedown
5. “Painting Flowers” performed by All Time Low
6. “Where’s My Angel” performed by Metro Station
7. “Strange” performed by Tokio Hotel and Kerli
8. “Follow Me Down” performed by 3OH!3 featuring Neon Hitch
9. “Very Good Advice” performed by Robert Smith
10. “In Transit” performed by Mark Hoppus with Pete Wentz
11. “Welcome to Mystery” performed by Plain White T’s
12. “Tea Party” performed by Kerli
13. “The Lobster Quadrille” performed by Franz Ferdinand
14. “Running Out of Time” performed by Motion City Soundtrack
15. “Fell Down a Hole” performed by Wolfmother
16. “White Rabbit” performed by Grace Potter and the Nocturnals
Alice In WonderlandAlmost Alice