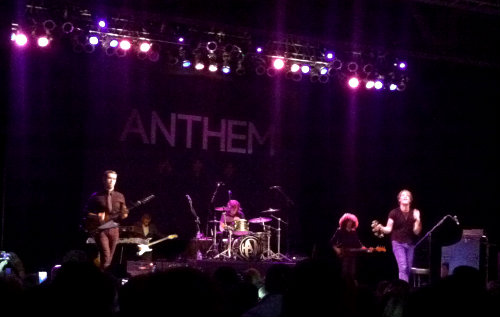 The Hanson brothers are currently on tour in support of their ninth studio release, Anthem. On a lazy Sunday night, my friend and I were debating staying in or going out. We’d escaped from NYC to Long Island for some sun-bathing and R&R over the Labor Day weekend.

While browsing the nightlife options, my friend stumbled upon Hanson playing at the Paramount. It wasn’t sold out. The decision was made, we were going to the concert. Turns out there’s a lot more to the Hanson brothers than “Mmmbop”. Here’s five things I learned at the show:

1. The brothers are surprisingly talented musicians
Is it that surprising though? They’ve been playing music their whole lives and it shows. The boys play multiple instruments with ease. At one point Taylor and Zac swapped places, with Taylor banging on the drums as Zac belted out a ballad on the keyboard. There was also that moment when Isaac let it rip with an electric guitar solo.

2. They’re not ashamed of “Mmmbop”
They know the hit song brought them fame and success (and from some, mockery). They fully embrace it and are not reluctant to give their fans what they want. I can only imagine how many times Hanson’s sang “Mmmbop” since its 1997 release, but they gladly performed it to a roar of cheers toward the end of their set.

3. Babies. Lots of babies.
While conversing with other concert-goers, I learned the three brothers have 9, soon to be 10 kids among them. Zac, 27, has two with a third due this fall. Taylor, 29, has five and Isaac, 31, has two. The fathers have speculated that their sons may follow in their musical footsteps, so don’t be surprised if Hanson: The Next Generation pops up on the radio waves one day.

4. Hanson fans are crazy
There were a lot of couples in their late 20s – early 30s in the audience enjoying a fun date night. As for all the single ladies in the crowd? They were having a baller time dancing, jumping around and scream-singing the words to each song. Even Hanson commented from the stage, “you guys know how to have a good time, we want to party with you.” Even after the concert ended, fans continued singing they’re favorite songs as they spilled onto the street – most notably, “Get The Girl Back”.

5. Now you can get drunk on Hanson beer
The Anthem tour marks the 21st anniversary of Hanson the band (don’t you feel old?). To celebrate their ‘legal’ status, the boys have released Mmmhops, a pale ale for your drinking pleasure. Sadly the brew was not for sale at their merch table (but Hansonoply was?) so my quest to taste Mmmhops continues.